In a fitting tribute to Halloween John Everson and his latest release, The Pumpkin Man, joins us as our countdown nears the end.

After her father's gruesome murder, Jenn needed a place to get away from it all with some friends, to take her mind off her sorrow. The empty seaside cottage she inherited seemed perfect. Jenn didn't know that the cottage held arcane secrets, mysteries long hidden and best left alone. She didn't realize until it was too late that the old books and Ouija board she found there really do hold great power. And it was only after her friend's headless body was discovered that she knew the legend of the local bogeyman was no mere legend at all. An evil has been unleashed, a terrifying figure previously only spoken of in whispers. But now the whispers will become screams. Beware...The Pumpkin Man. 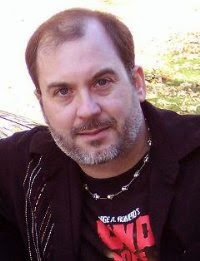 
John shares a deep purple den in Naperville, Illinois with a cockatoo and cockatiel, a disparate collection of fake skulls, twisted skeletal fairies, Alan Clark illustrations and a large stuffed Eeyore. There's also a mounted Chinese fowling spider named Stoker, an ever-growing shelf of custom mix CDs and an acoustic guitar that he can't really play but that his son likes to hear him beat on anyway.

Sometimes his wife is surprised to find him shuffling through more public areas of the house, but it's usually only to brew another cup of coffee. In order to avoid the onerous task of writing, he occasionally records pop-rock songs in a hidden home studio, experiments with the insatiable culinary joys of the jalapeno, designs book covers for a variety of small presses, loses hours in expanding an array of gardens and chases frequent excursions into the bizarre visual headspace of '70s euro-horror DVDs with a shot of Makers Mark and a tall glass of Newcastle.

Learn more about John on his site, www.johneverson.com, where you can sign up for a direct-from-the-author monthly e-newsletter with information on new books, contests and occasionally, free fiction.
Want to connect? Follow John on Twitter @johneverson, or find him on Facebook at www.facebook.com/johneverson.