Day four finds us with one of my favorite authors.

Click on cover for more info or to order a copy.

Synopsis:
Twenty years ago, the mysterious death of his aunt left Aaron Holbrook orphaned and alone. He abandoned his rural Arkansas hometown vowing never to return, until his seven-year-old son died in an accident, plunging Aaron into a nightmare of addiction and grief. Desperate to reclaim a piece of himself, he returns to the hills of his childhood, to Holbrook House, where he hopes to find peace among the memories of his youth. But solace doesn’t come easy. Someone—or something—has other plans.

Like Aaron, Holbrook House is but a shell of what it once was, a target for vandals and ghost hunters who have nicknamed it “the devil’s den.” Aaron doesn’t believe in the paranormal—at least, not until a strange boy begins following him wherever he goes. Plagued by violent dreams and disturbing visions, Aaron begins to wonder if he’s losing his mind. But a festering darkness lurks at the heart of Holbrook House…a darkness that grins from within the shadows, delighting in Aaron’s sorrow, biding its time. 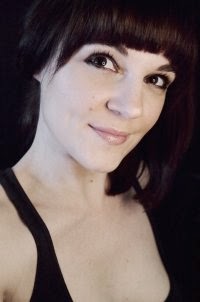 Born in Ciechanow Poland, Ania has always been drawn to the darker, mysterious, and sometimes morbid sides of life. Her earliest childhood memory is of crawling through a hole in the chain link fence that separated her family home from the large wooded cemetery next door. She'd spend hours among the headstones, breaking up bouquets of silk flowers so that everyone had their equal share.
Beyond writing, Ania enjoys gourmet cooking, baking, movies, drawing, and traveling. She currently resides in Albuquerque, New Mexico with her husband and two dogs, Beau the Scottie and Galaxy the Yorkie.
Learn more about Ania on her site, www.AniaAhlborn.com, where you can sign up for a direct-from-the-author newsletter on new releases, promos, and more.
Want to connect? Follow Ania on Twitter @aniaahlborn, or find her on Facebook at www.facebook.com/aniaahlbornauthor.