Welcome to my second annual Halloween Horror Author Countdown. Every day this month I will be posting about a different horror author. But this year I'm gonna change it up a bit as I have a novel set to be released on October 30th, so ten of the days this month will be given over to the first ten chapters of Parasite (Shadows of the Past Part II), to give those of you unfamiliar with my writing a chance to read my work for free.

Without further delay let's get started. First up is Harvey Click's The Bad Box. I read this in June and you owe it to yourself to take a look.

Synopsis:
Sarah Temple hopes to find a bit of peace and quiet when she leaves her abusive boyfriend, but instead she finds a world of horror. It’s bad enough that a sadistic serial killer and another maniac are both trying to murder her, but what’s worse is the mysterious Solitary One who controls both of them, a malevolent entity that the serial killer describes as a living darkness, a man and yet not a man, something that’s alive and yet not alive, something that wants to appall the world.

Trying to flee from the two killers, Sarah finds herself running deeper and deeper into a deadly supernatural trap, a place where people are buried alive, where ghastly apparitions mutter in the dark, where demented killers prowl, where a crumbling haunted house can drive its victims mad with terror, and where something buried for a very long time may walk again. 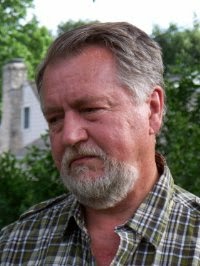 A little about Harvey:

Harvey Click earned an M.A. in English from Ohio State University, using his first novel as a master's thesis. He has written five novels, four of them in the horror genre, and numerous short stories. He has taught English and creative writing for Ohio University, Ohio State University, the James Thurber House, and OSU's Creative Arts Program.
Posted by Richard Schiver