They lived in a new reality, the time after, adventurers in an old new world. At fourteen they had been forced by circumstances into adulthood. Coming of age when the few remaining Zombies were the least of their worries. Where savagery was the norm, and man’s inhumanity to man was on daily display. 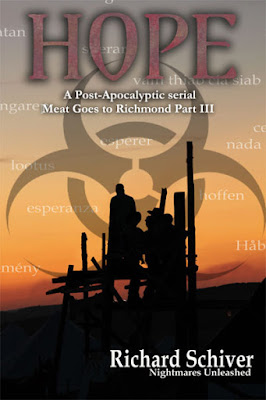 The horrors of the past meet the brutality of the present as the boys achieve their objective, but not without loss. A journey that began with the opening of a grave, will end in the same manner, as they each learn that in this life, hope is the only thing no one can take from you.

About Meat Goes to Richmond.
For me the whole concept of writing an ongoing serial was something new. I'd never done it before, and while it was an enjoyable experiment, I doubt I'll do it again. Let me rephrase that, I most likely will do it again, but when I do I'll handle the release of each part differently.  My plan had been to release a novella in three parts, one ten thousand-word part each month to complete a thirty thousand word novella in a three month time frame.

You know what they say about the best laid plans of mice and men. I failed by not meeting the most important deadline, that of part three.

As I wrote the serial, from the start I was taking my cues from Meat, Einstein, Window, and Billie-Bob. There was no outline, no synopsis to speak of, nothing to provide guidance along the way. It was simply follow the story as they ventured from the security afforded them at Bremo Bluff to Richmond where the kidnapped children had been taken.

It was when they reached Richmond that everything jelled and the central theme of the story, something that had been staring me in the face throughout parts one and two, suddenly leapt into focus and the concept solidified.

The why became obvious.

Have you ever wondered what would happen to the creatures of the night during and after an apocalyptic event that radically reduced the population while at the same time lifting the restraints of civilization? Take a psychic vampire for instance, these beings feed on the life force of those around them, more specifically in this case, they feed on the fear of children. A creature that was best described in Stephen King's novella, The Library Policeman, originally published in the collection Four Past Midnight that came out in 1990.

How would this creature respond to the terror of an apocalyptic event such as the recently deceased rising from the dead and attacking the living. In the opening days of course it would gorge itself on the terror washing across the land. But once the walking dead, who felt no fear, established their dominance over the living, what would it do then?

How would it survive?

It was this thought that created the driving force behind the story. The what if that compelled me to follow them through to the end. It was the reason the children had been taken in the first place.

But to see what it is you'll have to read the story.

It also gave birth to a prequel that I am currently hard at work on.  This Way to Heaven will follow the lives of five young boys who lived in the apartment building at the outset of the apocalypse. Following their descent into the savagery they must adapt to in order to survive.

Richard was born in Frostburg, Maryland, in the winter of '58' and currently lives eight miles away. A five-year stint with the military allowed him to see what he wanted of the world. Married with four grown children and eleven grandchildren, he and his wife provide a home to four pets that are spoiled beyond rotten.

While the majority of his fiction is dark, his focus is on the character's struggle to reach the light at the end of the tunnel. A fight that mirrors his ongoing battle with depression. An avid reader he has written and published three novels, two novellas, and a collection of short stories since his return to writing in 2008 after a computer crash wiped out nearly ten years of work in 2001.

In addition to writing daily he works a full time job in retail, and piddles around in his wood-shop making one mess after another when time permits as he works on his house and a honey-do list that never ends.

Sign up to be notified of new releases when they become available. He promises to never share your contact info, nor will he swamp your inbox with unnecessary crap. http://www.eepurl.com/2bYSf
Posted by Richard Schiver