Advice Does Not Equal Rules 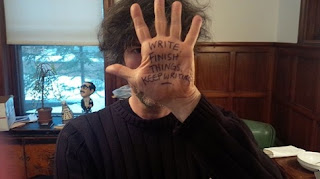 Hi, I’m Dev Jarrett. I’ve written a bunch of short stories and a couple of novels. The first novel was Loveless, published by Blood Bound Books in 2013. It’s the story of a ghost haunting a Georgia lake. Permuted Press published my second, called Dark Crescent, just a few days ago. It’s the story of an accidental psychic who uses his talent to prevent a savage murder, then unwittingly becomes the murderer’s next target. Further up the pipeline, my third novel will also be published by Permuted next February. It’s called Casualties, and it’s about a soldier back from Afghanistan who must fight a demon in the Arizona desert. After that, well, who knows? I’m working on a number of other projects at various levels of intensity. Werewolves, dolls, vampires, sea monsters...all those stories and more are coming.

Novice writers, like all artists, are often given stupid advice. “You want to sell books, then...” “...write what you know.” “...you need a strong hook at the beginning.” “...give your readers a character with whom they can identify.” There are at least a hundred others, and most of them come from respected sources. You can find lists of them everywhere, and all those lists claim to be definitive.

Read the rest at Darkness Dwells
Posted by Richard Schiver