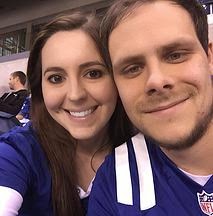 Caleb Monroe is a high school math and science teacher who never quit reading comic books.  Writing is something that I have always wanted to try and after being a teacher for a few years I decided now is better than never.  To be honest, I went to school with the idea of making sure to stay away from English courses because writing has never been something I felt I was good, at least from the technical side.  I decided to go the science route and got my degree in biochemistry and found out along the way that teaching the material is something I am pretty good at.  So over the last few years of teaching, I got the itch to try to take a story I had come up with and put into a book.  This idea has turned into New Beginnings. This is the first book of a trilogy that I am writing called the Quarantine Series.  I am not looking to be the next big thing, but I wouldn't mind if it happened.  I really just want to keep doing what I hope I did in the first book, and that is write something that makes you care about the characters and the journey they are on during the series.

A.) The very first story that I ever wrote was a short story about a group of kids who went to a scary amusement park.  I wrote this in fourth grade for an English assignment and I still remember that I fell in love with the story and the process of writing it.  Over the next couple years I would come up with some more stories but I never really made it a serious practice.  I went on with my life and eventually I became a teacher and last year I finally decided to get back to writing.  I live in Louisiana and last January we had about a week off due to freezing rain so one day I simply decided it was time to write the story I always promised myself that I would write.  It was during those off days that I remembered how much fun it was to create a world that people could fall into and lose themselves.  From that week forward I begin writing what has become my first fiction series call The Quarantine Series.

A.) I always thought that hardest part would be the actual writing part.  I always saw in movies or on twitter that writers would talk about struggling to get started or just making their word count for the day, but that actually came easy to me.  I had no problem, on an off day, writing five or six thousand word.  I just loved telling my story and once I started it was hard to not stop.  So for me the hardest part of writing would be proofreading.  I have always struggled with grammar and things of that nature so having to proofread my book was a very horrible experience.  You never realize how bad you are those things until you try to read through your own writings.  I am constantly second guessing myself about punctuation or spelling and it can often bog down my writing.  I will get into a great rhythm and then hit a snag which will derail for me a little while.  I have learned while writing more that the best thing for me to do is just write and then once I am done with a book I go back and check over it.  That is the best thing I can do to keep my writing from becoming sour.  I also apologize for what I am sure are the multiple mistakes you will find while reading my responses.

A.) When I finished my book I felt as if I had done the impossible.  I had actually completed the first part of my trilogy and there was nothing better than that at the time.  Unfortunately for me, after getting my first review that all changed.  I got a review that was really harsh and somewhat accurate.  The harsh part was just an opinion, but the accurate part was something that talked about my grammar.  I was almost broken after seeing that the reviewer was right.  I almost took my book down out of embarrassment, but then I decided to use this to my advantage.  I published my book amazon independently which allowed me to take the book down and rework it.  I spent a month going over it and doing my best to fix the mistakes that were pointed out.  I ended leaving the whole experience with an even better appreciation for what I had done.  I had taken something that almost broke me and made my book even better.  I walked away from it feeling as if I was back on t0p of the world again.  It even pushed me to get back to writing again and now I am a few weeks away from finishing the third book and beginning to get it proofread professionally so that it can be for sale by the years end.

A.) I think that character plays a much larger role in how I like to write stories.  I spend a good amount of time coming with a story, but at the core of each of my books it comes down to what my characters are going to be forced to do and how they would handle it.  I designed my characters in a way that my story had to flow in a specific way because there was only one way they would handle certain situations.  The story had no other choice but to unfold in the manner that it did because if I wrote it any other way then the read who never believe that my character would do those things.  I wanted to write a story that made the reader stop and think about why my characters were acting the way they were.  I never wanted at any point for them to think that the story is just moving along the characters are just a long for the ride.  My characters actions are what push everything forward.  If I had used different characters then I have no idea how my story would have progressed.  The best example I can think of is that while writing my first book I wrote something that changed the whole outcome of the series.  I simply wrote down a thought that my main character had and I knew what he had to do.  It changed the ending that I wanted to do, but it was the only natural ending that my character could come to while on this journey.

A.)  Being a teacher means that my days are pretty standard.  I wake up, go to school, teach algebra 2 and honors chemistry, then go work out, I go home to my wife and dog, and then the next morning I do the same.  I really do love my job, but free time is something that I do not have a lot of between preparing for the next day and all of the clubs I run.  What little time I do have is spent either playing music or writing, or reading comic books.  I am a hug comic geek so I always make time for that during the week.  I am a very busy person but I have found ways to sneak in some time for those things that are an outlet for me like writing and music.  I may only get a little each day with them, but they are some of the most important parts of my day.