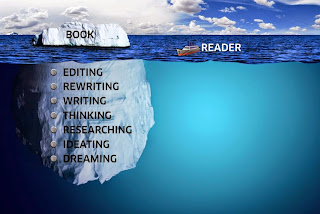 A question that comes up often for writers is "Why do you write?"

Replies may run from "I don't know," to "because I must."

“Lock up your libraries if you like; but there is no gate, no lock, no bolt that you can set upon the freedom of my mind.” (Virginia Woolf)


Occasionally you'll run across a writer who will tell you honestly that writing allows them to play on playground in their mind. It is after all, what we as writers do best. Stephen King summed it up in his book On Writing when he said “When I’m writing, it’s all the playground…”

“I love writing. I love the swirl and swing of words as they tangle with human emotions.” (James A. Michener)

By the same token writers can be quite bashful about sharing what they do, especially new writers who are just setting foot upon that path. Embracing the writer within generally goes against standard convention. By many we are viewed as adults trapped within a child's imagination for as children we are encouraged to embrace our creativity, to explore our imagination to the fullest. Yet when we become adults we are then told we must give up childish things.

“Your intuition knows what to write, so get out of the way.” (Ray Bradbury)

“You can make ANYTHING by writing.” (C.S. Lewis)
Writer's on the other hand have consciously chosen not to put away their childish things. They continue to explore the unfathomable depths of their imagination as they create whole worlds from the very fabric of their thoughts. They refuse to quit playing in the playground of their mind. Many may view their dedication as proof that they have yet to grow up. Their own families may not approve of their desire to write, telling them what they really need to do is find a good job and settle down. To put away their childish things and grow up.

When I hear any of this I recall the words of C.S Lewis who said in part: "When I became a man I put away childish things, including the fear of childishness and the desire to be very grown up."

Embrace your inner child, and the writer that exists within us all, explore the unfathomable depths of your imagination without shame. It's their problem if they can't accept you as you are, not yours.

Don't forget, October 1 will signal the start of my annual Halloween Horror Author Countdown, that's 30 authors in 30 days and I've got one hell of a line up coming your way.
Posted by Richard Schiver