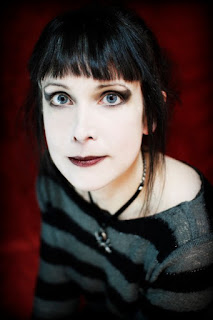 I was born in Bristol, South West England in the 1970's. Now I live by the sea in North East Scotland with a husband, two kids and three cats. I've studied English and Creative Writing with the Open University. I'm a Goth and used to run and design clothing for a Gothic company before I became a full-time writer.


The trilogy is about a group of friends, one of which accidently unleashes a demon who starts a murder spree. It's very much about how the characters and the story develop in interconnected ways. Although it is both comfortable in the horror and erotica genre, it's primarily a series of books about people. Flawed, beautiful, intelligent and highly sexed people.

I'm working on the third book at the moment. I'm also hoping to release a collection of spooky stories in 2013. I have a short story on Kindle called "A Christmas Carole" which is light-hearted lesbian erotica.

1.) When did you first get serious about writing?
I wrote short stories and poetry from a young age, but I started writing novels and thinking about getting work published about 8 years ago. My first finished novel was Starblood, although the first one I started writing was The Ballerina and the Revolutionary.

2.) What is the hardest part for you about writing?
Starting and stopping. Getting the spark of a great plot idea can be very frustrating. I only need the seed of an idea and the rest grows as I write, but that seed can take a long time to appear. The other hard part is knowing when a book has been edited thoroughly enough to submit to the publisher. "One more read through" could well be written on my grave. 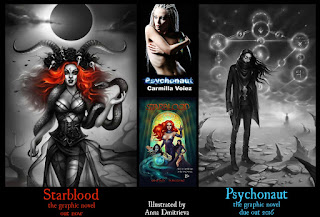 3.) How did you feel upon publication of your first completed project?
Excited, elated and terrified that I wasn't good enough and had just fooled people into thinking the book was worth publishing.

4.) What is more important to you, story, or character? Why?
Characters. For me the characters ARE the story.

5.) What is a typical day like in your world?
I don't tend to have typical days. On days when I don't have to go out to my "day job" I plan to write in the mornings, read in the afternoons and promote in the evenings. It rarely turns out that way.

Why I write horror.

I write horror because life terrifies me a little less when filtered through the lens of fiction. Evil can be condensed and distilled in demons instead of metered out between the people around us, festering and ready to take advantage of any perceived weakness.

Or to quote Justin Edward Sullivan (New Model Army "Stupid Questions") "When someone comes to eat me alive... I like to see their teeth" 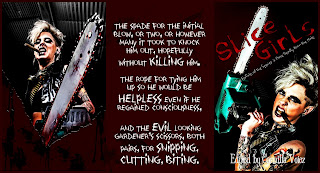 Slice Girls, an anthology of Feminazi Splatter Goth. The Female of the Species is More Deadly Than the Male.

From tales of revenge and spurned lovers to vengeful ghosts and blood-thirsty misandrists. This unique collection of tales explores the violent potential of women. Turning old tropes on their heads we have male victims and female killers. This anthology of Feminazi Splatter Goth will uncover the darkness of the “fairer sex” and prove the age old maxim that – the female of the species is more deadly than the male. Short stories of horror and torture from indie authors around the globe.

The shed waited for me, unlocked as always. These people were so trusting. Had nothing bad ever happened to them? Well that would change soon. I doubted whether, after today, Amanda would be able to leave a single door unlocked. I still hadn't decided what I'd do if she came home too early. I had four hours and that should be plenty of time, but what if her plans changed and I was forced to think fast? Could I hurt her? I didn't know and hoped I wouldn't have to find out. Daryl deserved what was going to happen, I knew that in the deepest parts of me, but Amanda was innocent, or as innocent as anyone could be in this sick and twisted world, and that baby...

I lifted the shovel off the hook, some rope, an evil-looking pair of shears and a ridiculously sharp pair of secateurs. I looked at each in turn – the spade for the initial blow, or two, or however many it took to knock him out, hopefully without killing him. The rope for tying him up so he would be helpless even if he regained consciousness, and the evil looking gardener's scissors, both pairs, for snipping, cutting, biting. I wished I'd had the strength to bite him before. Hurt him, crushed him, pierced his skin rather than letting him use my mouth for his pleasure. This time it would be very different. This time my jaws would not be pliant, they would be jagged.


Blood Lily by Jenny Allen
The Misadventures of Bob by Jaime Johnesee
A Jar of Fingers by C.L. Hernendez
A Coin for Charon by Dallas Mullican
The Human Condition by Mark Taylor
Spook Lights by Eden Royce
In the Hands of the Unknown A.E. Hellstrom
Winchester Over by Dave Lund
The Complex by J Rudolph
The Dead Song Legend by Jay Wilburn
Zombie and Chainsaws by Mike Evans
Flight of Destiny by Francis H Powell
Through a Mirror Darkly by Kevin Lucia
Awfully Apetizing by Leod D Fritz
Darkly Wood by Max Power
Family Reunion by P. Mark DeBryan
Slice Girls by Carmilla Voiez
Zombies Inside  by Rebecca Besser
Cannibal House I by Shaun Adams