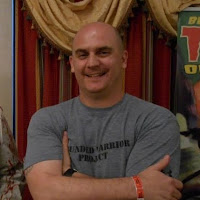 Dev Jarrett is a writer, a father, a husband, and a soldier. He’s a “recovering redneck” who'll probably never get all the red Georgia clay out of his pickup truck's undercarriage. He’s a Chief Warrant Officer 4 in the US Army who’s lived all over the world but is currently stationed in the heartland at Fort Riley, Kansas. During the day, he works to defeat terrorists.

At night, the other monsters come out. He’s had many short stories published, both online and in print, and Dark Crescent, available now from Permuted Press, is his second novel. His first novel, Loveless, is available through your favorite retailer or directly from Blood Bound Books.

Dev’s next novel, Casualties, is coming in 2016 from Permuted Press, to be followed by Little Sister soon thereafter.

I write. I write horror. I love to write horror. I don’t mince around and try to make it more than it is—I don’t write paranormal suspense, or dark fantasy, or any of the other half-stepping horseshit terms that some use to try to soften or legitimize the genre. It’s horror. Horror is what it is, and to try to water it down with more acceptable labels is not only stupid, but also shows a sort of embarrassing self-consciousness that’s a little pathetic.

There are different types of horror, but they’re all still under that same wide, black umbrella. I enjoy many subgenres of horror, and that’s why I was initially interested in the following. A couple of weeks ago, I happened upon some clickbait about a “new subgenre” that some nimrod has decided on calling Dreadpunk.

Dreadpunk? Well, that’s catchy, I guess, kind of cool-sounding. I have to admit, I was curious. I had in my head the other -punk subgenres I’d grown up reading, most notably splatterpunk and cyberpunk. I was a wide-eyed 80s kid reading Skipp and Spector, Schow, Brite, Etchison and others on one hand, and Gibson, Sterling, Cadigan, and their like on the other.

Splatterpunk was exactly what its name implied. It was visceral, bloody, and joyfully manic fun. This was at the height of the 80s horror boom, and a ton of horror was being published—it didn’t even have to be that good, but people were buying it by the ton. That’s part of why horror was soon banished into the basement again (but that’s another whole essay)—even Stephen King went out on his epic Dark Tower quest and away from real horror for a while (The Gunslinger was first published as a single volume in 1982, and didn’t come full circle until 2004, when The Dark Tower was published. Even after that—The Wind Through the Keyhole (2012)—he wasn’t finished with it).

For every good horror novel by the big boys in the 80s—King, Barker, McCammon—fans had to wade through endless lakes of worthless shit attempting to be horror. Trying to find a good horror story was a quest in itself—and yes, even some of the shitty ones had those “diamond in the rough” moments. Then something like The Light at the End gets published (1986), and it pumps new blood into the body of horror. A vampire (old school horror) versus young Manhattan subculture (new school heroes). That book ushered in many more, where the source of the terror wasn’t implied or hinted at, like a corpse beneath a shroud—oh no. This horror was in your face, cackling and gibbering, oozing pus and snot all over your shoes. It didn’t hold back. It was transgressive. In a word, punk.

Similarly, cyberpunk was a movement in science fiction that extrapolated from current technology and society forward a few years into the future—virtual reality, surgical enhancements, genetic tinkering—all in a strangely familiar society of greed, materialism, and advertising that still isn’t too farfetched. The seminal work of cyberpunk, Neuromancer, first published in 1984, broke new ground in science fiction. The three Hugo winners before Neuromancer were stories of far-off worlds and interstellar travel (Startide Rising (1984), Foundation’s Edge (1983), and Downbelow Station (1982)). Not Neuromancer. Neuromancer was a story of a hacker, pulling off the greatest hack ever. This was a story of the Sprawl, a story that was gritty, dirty, and showed a future just over the horizon. It was fantastic. And yeah, it’s punk.

This is key: both of these literary movements added value to their genres. A leanness, a toughness that didn’t mind showing the seamy underside of technology or of monster killers. They made a difference. In sociological terms, transgressive ideas—punk ideas—have one of two possible results. They either get rejected outright, or they eventually become part of the new accepted. (Thesis leads to antithesis which results in synthesis, right?) Most of their effects have now been integrated into the current canon of tropes in their genres. These works of splatterpunk and cyberpunk seeded the futures of their literary realms.

Now fast forward thirty years, and I see a teaser for this article in my Facebook news feed:

It asks the question “What is Dreadpunk?” and offers a “quick guide to a new subgenre.”

Intrigued by the idea of something cool and new, I clicked the link. I read the article.

Ho. Lee. Shit. What a joke. Once again, people want to put a different name on their horror and by doing so create a new thing that’ll have more class than horror. Turns out, Dreadpunk is just someone trying to give themselves a cool-sounding label while trying to revitalize gothic writing. Their sources of inspiration include Frankenstein, Dracula, the works of Poe, and many others—all gothic horror. Their modern examples of Dreadpunk include things like Johnathan Strange and Mr Norrell, Sweeny Todd, and Crimson Peak. Um...wait. Those are still just gothic horror. If someone wanted to really stretch they could say it’s Victorian Period Horror but still, it’s gothic.

It’s an involved crapfest—I mean article—even codifying “3 Laws of Dreadpunk.” (By the way, the very idea of “Laws” totally misunderstands the punk aesthetic.) Another paragraph shows that it’s already being co-opted as someone’s social soapbox, which is repulsive in and of itself. If you’re hijacking a story to preach at me, I’m going to quit reading your story.

So, by the terms above, cyberpunk and splatterpunk are legitimate subgenres of horror and science fiction respectively, in that they added something that was not already there—they crossed lines that other works had not, pushing the envelope and adding value to their respective genres. Will dreadpunk—nothing more than a sad rehash of Victorian horror—do the same? I doubt it. In fact, I wouldn’t be surprised if this is the first and last time you ever hear about it.

I write. I write horror. And if the story takes place on some foggy moor in the 1800s, guess what? It’s STILL HORROR.


Win your very own  horror library.


Blood Lily by Jenny Allen
The Misadventures of Bob by Jaime Johnesee
A Jar of Fingers by C.L. Hernendez
A Coin for Charon by Dallas Mullican
The Human Condition by Mark Taylor
Spook Lights by Eden Royce
In the Hands of the Unknown A.E. Hellstrom
Winchester Over by Dave Lund
The Complex by J Rudolph
The Dead Song Legend by Jay Wilburn
Zombie and Chainsaws by Mike Evans
Flight of Destiny by Francis H Powell
Through a Mirror Darkly by Kevin Lucia
Awfully Apetizing by Leod D Fritz
Darkly Wood by Max Power
Family Reunion by P. Mark DeBryan
Slice Girls by Carmilla Voiez
Cannibal House I by Shaun Adams
Zombies Inside by Rebecca Besser
Dark Crescent by Dev Jarrett