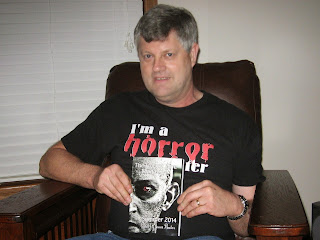 A freelance horror writer living in the woods near Auburn Univesity with his wife Sheila, Thomas Kleaton is slowly emerging as a master of the short tale. His work has made appearances in The Horror Zine, Dark Eclipse Magazine, as well as the anthologies Cellar Door: Words of Beauty, Tales of Terror, Serial Killers Tres Trias, Bones, The Horror Zine Magazine Summer 2014, The Riding Light Review Special Halloween Horror Issue #1, Spooky Halloween Drabbles 2014, Speculative Valentine Drabbles 2015, and What Has Two Heads, Ten Eyes, and Terrifying Table Manners? His drabbles, horrific tales of exactly one hundred words, have also appeared on Hellnotes.

1.When did you first get serious about writing?

I decided two years ago to finally attempt putting words on paper to entertain others; I’m making this my second career whether the pay is good or not. Writing is something I enjoy, so I decided it was now or never and began submitting short stories. I ask myself if I am sure this is something I want to do from now on, and the answer is always yes.

2.What is the hardest part for you about writing?

For me the difficult part is imagining the scenario in the story, the plot. Sometimes I can write and the plot I planned out takes a wild turn during the progression of the story and I end up with something completely different than what I envisioned. I’m constantly looking for that moment in the story that defines what was written from its beginning, the magical unveiling that rewards the reader for having followed the story to its frightening end. 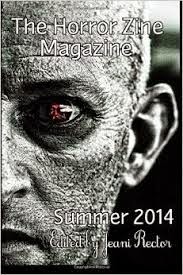 3.How did you feel upon publication of your first completed project?

Simply put, I felt as if I were on a rocket ship soaring to Mars with Mr. Ray Bradbury himself. Nothing trumps the satisfaction you get upon learning that something you wrote, something you poured your imagination into and staked your reputation upon, will be published in a book or magazine for others to enjoy. It puts you on the moon.

4.What is more important to you, story, or character? Why?

Characters. Characters make life interesting, and interesting characters will always be read. Story is simply the end result of how the characters react to a situation, how their motivations, fears, love, and intellect deal with the known or unknown.

5.What is a typical day like in your world?

I get up, then check my email and Facebook messages. Work at my day job until around five p.m. while trying to come up with new story ideas during my idle time. I do carry a pocket memo book for any ideas I come up with. If I have a lot of idle time at work, I may brainstorm a drabble or read a horror story on my Kindle Cloud Reader. After work I try to write for at least an hour every night. If the muse isn’t cooperating, I will watch a horror movie. At bedtime I try to read for at least an hour, visiting new authors’ works or maybe even Mr. Ricky Hawthorne or Mr. Sears James from Ghost Story.


Blood Lily by Jenny Allen
The Misadventures of Bob by Jaime Johnesee
A Jar of Fingers by C.L. Hernendez
A Coin for Charon by Dallas Mullican
The Human Condition by Mark Taylor
Spook Lights by Eden Royce
In the Hands of the Unknown A.E. Hellstrom
Winchester Over by Dave Lund
The Complex by J Rudolph
The Dead Song Legend by Jay Wilburn
Zombie and Chainsaws by Mike Evans
Flight of Destiny by Francis H Powell
Through a Mirror Darkly by Kevin Lucia
Awfully Apetizing by Leod D Fritz
Darkly Wood by Max Power
Family Reunion by P. Mark DeBryan
Slice Girls by Carmilla Voiez
Cannibal House I by Shaun Adams
Zombies Inside by Rebecca Besser
Dark Crescent by Dev Jarrett