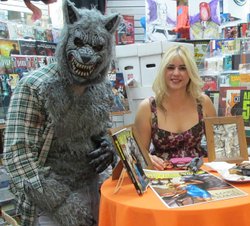 "Werewolf Nights" is the first novel for author Mari Hamill, who has an English degree from Harvard, comparative literature degree from the Sorbonne Nouvelle and a Ph.D. in comparative literature from the University of Michigan. The world traveler - she's lived in Guaynabo, Puerto Rico; Boston; Montreal; Paris; Venice; and Lausanne, Switzerland - speaks French, Spanish, German and some Italian. She now lives in Venice, Calif. Hamill's love of fantasy was sparked by Metro Comics, her family's comic book store, in Guaynabo.

Synopsis:
Threatened by financial ruin, widowed bakery owner Catherine Mercy leads a solitary life with more interest in reading about werewolf lore than in finding a man. Her one true love disappeared after high school and her now deceased husband kept her trapped in the house claiming that a werewolf might hunt her down one day, just as her grandmother repeatedly warned her. When Hollywood interrupts the town's monotony by shooting a werewolf movie on location, Catherine's best friend Anne pushes her to audition. Already in her thirties, Catherine feels ridiculous trying to become an actress, but lands the leading role.

Catherine's daily routine turns into a hair-raising adventure as fame begins to surveil her wanderings and she falls for her sexy costar Greg Byron despite this actor's neon warning sign that flashes conceited womanizer. He's also smitten by her, but just when they are about to find happiness, a wolf bites him.

While Greg's features turn lupine, Catherine discovers a resemblance between the movie script and her family's history. Frightened, Catherine recruits werewolf expert Steve to figure out if the movie's werewolf legend is real and if Wolfern, the werewolf her grandmother dreaded, has finally come for her. If so, Greg will turn into a werewolf. Only undoing Greg's curse and destroying Wolfern before the next full moon can save their love and their lives.

Blood Lily by Jenny Allen
The Misadventures of Bob by Jaime Johnesee
A Jar of Fingers by C.L. Hernendez
A Coin for Charon by Dallas Mullican
The Human Condition by Mark Taylor
Spook Lights by Eden Royce
Mateguas Island by Linda Watkins
In the Hands of the Unknown A.E. Hellstrom
Winchester Over by Dave Lund
The Complex by J Rudolph
The Dead Song Legend by Jay Wilburn
Zombie and Chainsaws by Mike Evans
Flight of Destiny by Francis H Powell
Through a Mirror Darkly by Kevin Lucia
Awfully Apetizing by Leod D Fritz
Darkly Wood by Max Power
Family Reunion by P. Mark DeBryan
Slice Girls by Carmilla Voiez
Cannibal House I by Shaun Adams
Zombies Inside by Rebecca Besser
Dark Crescent by Dev Jarrett
Werewolf Nights by Mari Hamill