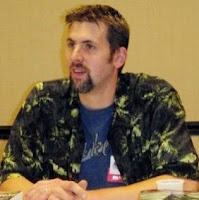 Kevin Lucia is the Reviews Editor for Cemetery Dance Magazine, and he writes a quarterly column "Horror 101" for Lamplight Magazine. His short fiction has appeared in several anthologies.

He is the author of Hiram Grange & The Chosen One, Book Four of The Hiram Grange Chronicles, the short story collection Things Slip Through, the novella duet Devourer of Souls, and the novella quartet Through A Mirror, Darkly. He's currently working on his first novel.

There are a lot more truths in the books we read, than we'd like to admit.

What if a book delves into the lives of the very town you live in? Reveals to you some personal stories of people you know? Or thought you knew.

Bookstore owner Kevin Ellison faces this truth when a mysterious book shows up in Through a Mirror, Darkly by Kevin Lucia.

"Arcane Delights. Clifton Heights' premier rare and used bookstore. In it, new owner Kevin Ellison has inherited far more than a family legacy, for inside are tales that will amaze, astound, thrill...and terrify.

An ancient evil thirsty for lost souls. A very different kind of taxi service with destinations not on any known map. Three coins that grant the bearer's fondest wish, and a father whose crippling grief gives birth to something dark and hungry.

Every town harbors secrets. Kevin Ellison is about to discover those that lurk in the shadows of Clifton Heights."

When a child mysteriously disappears from a small town and even his mother seems indifferent, it’s time for the new sheriff to step in.

Meet Chris Baker, the new sheriff of the quiet Adirondack town of Clifton Heights. As one inexplicable case after another forces him to confront the townsfolk in The Skylark Diner, it’s the furtive Gavin Patchett that hands Chris a collection of not-so-fictional short stories that tumbles him into a world of monsters, ageless demons, and vengeful citizens. As Chris reads through the stories the veil starts to lift, and he soon questions what is real and what’s not, and whether he really wants to know.

Nothing will ever be the same again.

So welcome to Clifton Heights, New York, an average Adirondack town, and nice enough in its own right. Except after dark, under the pale light of the moon. Or on a road out of town that never ends, or in an old house on the edge of town with a will of its own.

Maybe you shouldn't have left the interstate, my friend. But you saw our sign, turned down our road, figuring on a short stay. And maybe it will be.

While you’re here, pay a visit to The Skylark Diner. Pull up a chair and I'll tell you about our town. It's nice enough, honestly. Except after dark. Or on cold winter days when you're all alone...

Click on cover for more info or to order
Old Webb, an abandoned grammar school just outside Clifton Heights, is the place to be late summer nights in Webb County. A gathering place for friends to be themselves, away from grownups who have forgotten what it means to be young and free.

The summer of 1992, Kevin Ellison spent his Saturday nights there like everyone else. Everything was running according to plan: a college basketball scholarship, school, all the things everyone expected of him.

Then he met a girl named Michelle Titchner, and everything changed...


Blood Lily by Jenny Allen
The Misadventures of Bob by Jaime Johnesee
A Jar of Fingers by C.L. Hernendez
A Coin for Charon by Dallas Mullican
The Human Condition by Mark Taylor
Spook Lights by Eden Royce
Mateguas Island by Linda Watkins
In the Hands of the Unknown A.E. Hellstrom
Winchester Over by Dave Lund
The Complex by J Rudolph
The Dead Song Legend by Jay Wilburn
Zombie and Chainsaws by Mike Evans
Flight of Destiny by Francis H Powell
Through a Mirror Darkly by Kevin Lucia
Awfully Apetizing by Leod D Fritz
Darkly Wood by Max Power
Family Reunion by P. Mark DeBryan
Slice Girls by Carmilla Voiez
Cannibal House I by Shaun Adams
Zombies Inside by Rebecca Besser
Dark Crescent by Dev Jarrett
Werewolf Nights by Mari Hamill

Author T.W. Brown has added the first nine books of his Dead Series to the prize pool.

During the month we will track everyone's activity, assigning each action a number and at the end of the countdown a random number will be drawn. The person whose name appears next to that number will be the winner.
There may also be daily contests as a couple of authors have expressed a desire to hold smaller giveaways on the day of their post. So check back often and enter as many times as you like by tweeting about the contest, don't forget to use the hashtag #2015HHAC so your tweet will be counted.
Posted by Richard Schiver