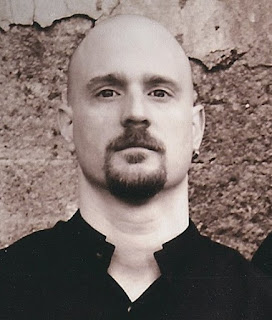 After spending twenty years as the lead singer of a progressive metal band, Dallas Mullican turned his creative impulses toward writing. Raised on King, Barker, and McCammon, he moved on to Poe and Lovecraft, enamored with the macabre. During his time at the University of Alabama at Birmingham, where he received degrees in English and Philosophy, Dallas developed a love for the Existentialists, Shakespeare, Faulkner, and many more great authors and thinkers. Incorporating this wide array of influences, he entices the reader to fear the bump in the night, think about the nature of reality, and question the motives of their fellow humans.

A pariah of the Deep South, Dallas doesn't understand NASCAR, hates Southern rock and country music, and believes the great outdoors consists of walking to the mailbox and back. He remains a metalhead at heart, and can be easily recognized by his bald head and Iron Maiden t-shirt.

The media has dubbed him the Seraphim Killer. He believes the gods have charged him to release the chosen, those for whom life has become an unbearable torment. Gabriel feels their suffering—his hands burn, his skull thunders, his stomach clenches. Once they are free, he places coins on their eyes to pay Charon for passage into paradise.

Detective Marlowe Gentry has spent the past two years on the edge. The last serial killer he hunted murdered his wife before his eyes and left his young daughter a mute shell. Whenever she looks at him, her dead eyes push him farther into a downward spiral of pain and regret. He sees the Seraphim as an opportunity for revenge, a chance to forgive himself―or die trying.

Gabriel performs the gods’ work with increasing confidence, freeing the chosen from their misery. One day, the gods withdraw the blessing―a victim he was certain yearned for release still holds the spark of life. Stunned, he retreats into the night, questioning why the gods have abandoned a loyal servant. Without his calling, Gabriel is insignificant to the world around him.

He will do anything to keep that from happening.