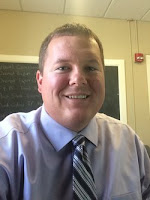 Cory recently stopped by my blog to share some info about his recently published first novel, 'Ogden' an action packed zombie story set in his home town of Ogden, IL where he lives with his wife Stephanie and daughter Sydney. The two dogs (Indiana and Bailey) that appear in this novel are his own and make quite an impression on readers. This novel acts as a prequel to his upcoming 'Orange Band' series. You can follow Cory on Twitter @Cory_Abernathy.

A seemingly routine accident investigation just outside of the small town of Ogden, IL, pulls Detective Desmond King into a tempest of terror. What Detective King discovers at that scene causes him to realize that something terrible is happening in Ogden and he must act quickly to prevent the town from destroying itself. When Detective King recognizes he has only a small chance left to save any of the 1,200 citizens of Ogden from each other, a new threat presents itself. One that promises to destroy not only the town itself, but everyone within it.
Posted by Richard Schiver