I grew up watching westerns every Saturday morning. Some of you may remember the old black and white weekly television shows featuring characters like Roy Rogers, Tom Mix, and the singing cowboy Gene Autry. Did you know Gene Autry was awarded the Medal of Honor for his actions in WWII? 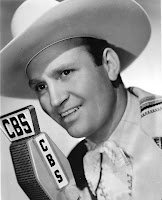 I’m full of odd little tid-bits of information like that.

As I grew older my tastes matured, yet my love of Westerns remained strong. I became an early fan of Clint Eastwood when he appeared in the Rawhide series. I know, we’re getting into ancient history here. I’ve followed Clint’s career through the spaghetti westerns of the late sixties early seventies, his Dirty Harry phase, “Make my day.” And beyond. In my mind his best western will always be The Outlaw Josey Wales. “Hell is coming to breakfast.” 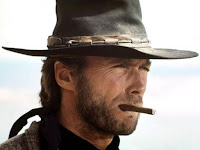 But what does all this have to do with Zombies and post apocalyptic fiction? You may be asking.

I’m getting to that.

The biggest reason I liked westerns, and I feel confident enough to say it may be a major reason why post apocalyptic fiction is so popular, is that feeling of being an explorer in a new world. A place of wide open spaces that offered elbow room to roam, a lawless land where the strong backed their words with the firepower they carried as they carved out a new life for themselves.

One of my favorite western movies is Tomstone with Kurt Russell as Wyatt Earp. “I’m bringing hell with me!”  He played along side Bill Paxton and Sam Elliot who portrayed brothers Virgil and ????. The last member of this quartet was Doc Holiday played by Val Kilmer. “Who’s your huckleberry? 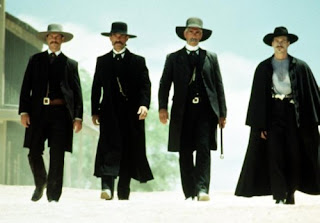 When I first started writing the story that has become All Roads Lead To Terror I envisioned my main character Meat as a blend of the ruthlessness of Clint Eastwood,  with the courage of John Wayne, and the wisdom of James Arness who portrayed sheriff Matt Dillon on Gunsmoke. Meat was born at the height of the Zombie apocalypse, upon his birth his mother took one look at him and pronounced him meat before she abandoned him with the man that would raise him. He grew up in a reality where they were all nothing more than walking bags of meat, so in his mind the name fit perfectly.

Window, his best friend, is pure Val Kilmer as Doc Holiday. Very quiet, studious with an ever watchful eye and a quick hand. To him friendship was the most important thing in the world. His family had perished in the ruthless times after the awakening and his temperament had been forged in the fire that took them from him. His friends were all he had left so he watched over them with a jealously protective nature strengthened by the sense of invulnerability all boys his age embraced. Backed by a quick hand with the .44 he’d used to kill the men who had raped and killed his mother.

The remaining members of this quartet are Einstein who had been born within the compound at Bremo Bluff after the apocalypse occurred. Having spent his life behind the fence he has no first hand knowledge of how brutal the world has become beyond the fence. As his name implies he’s the smartest in the group, as well the most innocent. While that innocence helps to soften the ruthlessness of the other three, it also serves to drive a wedge into their friendship. But he will discover just how terrifying the world beyond the fence has become.

The final member is Billie-Bob, one half of a set of twins who appeared outside the fence several years earlier. Your typical class clown his mouth runs a mile a minute, if he isn’t sharing overused jokes about Zombies, he’s whispering the passages from a book his mother used to read to him when he was younger, a chant that provides him with a degree of comfort. Billie-Bob is unique in that at the tender age of eleven he has proven himself to be a natural born sniper with a willingness to use his special talent to protect his friends.

All of them had been born during the apocalypse, growing up in the time after, surviving in a world that had little sympathy for those unable to defend themselves. It is said we are  the product of our environment, these four boys have shouldered the responsibilities of an adult long before their pre-awakening counterparts would have been required to. They became survivors in a ruthless world that had as yet to reveal the true depths of its depravity.

I believe post-apocalyptic fiction is the modern western. But unlike the westerns of old, where the ability to go back and experience it first hand would require a time machine. These modern tales of strong characters surviving in a wide open places has the potential to become reality.
Posted by Richard Schiver