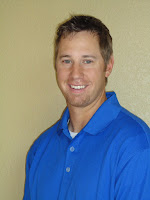 J.D. Dudycha is a former college baseball player and coach. He has over ten years of experience in baseball at the collegiate level. After the birth of his son in 2012, J.D. retired from coaching to be a stay-at-home dad. Since his retirement, he developed a love for writing, an outlet he so desperately needed in the absence of baseball. Though his stories are fictional, he has drawn from his personal life as well as his expertise and knowledge of the game to craft his novel. J.D. lives with his wife and son in Denver, Colorado, where he also enjoys golf and fly fishing.

A.)  About four years ago…I know, I know, it doesn't seem that long ago. The first piece I actually wrote was a YA novel about a young boy who loses his mother and immerses himself inside his own fictional tales to cope. Sounds a bit hokey, huh? In fact, I learned quite a bit from that experience. I wrote into dozens of agents looking for representation, and quickly thought I wasn't good enough. I was like, what? No one wants to buy this masterpiece of American literature, what a crock. It turned out to be the best thing to happen to me. Fast forward two years later and I felt called to write “Paint the Black.” My background has always been and will forever be tied to baseball. But I am also a broken down child of God, who has done so many wrongs in his life that I figured I could make quite a story if I combined the two.

A.)  Taking me out of the equation. Since I now write mostly sports fiction, and my background is in baseball, I find it hard to disassociate myself from each of my character’s scenes. Also I find it hard to find the time. With a three-year-old at home and another on the way, sometimes it is difficult for me to put pen to paper.

Synopsis:
Every boy who picks up a glove dreams of playing in the big leagues. Only a few are actually good enough to make the grade.

With a ninety-eight mile-per-hour fastball and a devastating slider, eighteen-year-old Jack Burke was a baseball phenom. Picked in the first round, his future as a superstar seemed destined. Nothing could stop the kid—except himself. His childhood dream of a baseball life would turn into a nightmare marked by injury, immaturity, and personal tragedy. After just a couple years of minor-league ball, he found himself on the outside of the diamond. He asked the question he never imagined, “What will my life be without baseball?”

Paint the Black is about pitching—and living—on the edge where decisions have consequences. But it's never too late to start over again.

A.)  I was overjoyed, and not in the way you would expect a writer to be overjoyed. Honestly I was so sick of the writes and rewrites of the novel. I just wanted someone other than me and my editor to see my manuscript. I wrote the story with the end reader in mind. My debut novel, was for them. My hope is that it can effect their lives in a positive manner.

A.)  Character’s…they are who the reader falls in love with. Even if it is a milieu story, where the world takes over, I believe that if the character's aren’t strong enough to move the story along, the reader will soon find themselves out of the book and onto the next. In every good story it is about what the character goes through, or what they have to overcome, the story is secondary.

A.) I am a stay-at-home-dad… so no two days are alike, but I typically get my writing in during my son's nap time. When I am in the process of writing my novels I usually try to write 1,000 words per day. I am also an avid golfer and if I ever experience writer's block I head to the course for some much needed therapy. It’s a place I can clear my head and find inspiration.