What does the future hold?
Where will it begin?
On a mountaintop?
At the bottom of the sea?
In a spaceship?

Or perhaps in a cabin by a pond enveloped by mysterious mists.
Mysterious mists that secrete forces of nature…
And good and evil.
*
Ed Hageman wants nothing more than to relax at Papoose Pond, but that's not to be. As the ultimate battle between good and evil shapes up around him, creatures are not what they seem. Many twists of fate, and many shock await not only Ed and his companions, but those of you who read his story.
Prophets of yore were not all-seeing after all. Gods and devils are not how holy books described them.
Blaze McRob spins the tale.
Blaze McRob untangles the legend.
Blaze McRob finds the meaning in the Mists of Papoose Pond 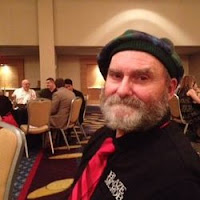 Blaze McRob has penned many titles under different names. It is time for him to come out and play as Blaze.

In addition to inclusions in numerous anthologies, he has written many novels, short stories, flash fiction pieces, and even poetry. Most of his offerings are Dark. However dark they might be, there is always an underlying message contained within.

Join him as he explores the Dark side. You know you want to.
Posted by Richard Schiver