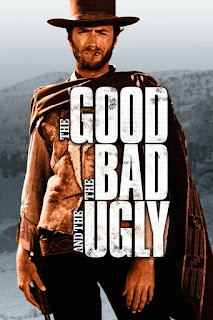 Growing up in the late sixties and early seventies we didn't have the internet, cell phones, or even remotes for our TV's for that matter, unless you had a younger brother you could order around to change the channels for you. At the time there were only about four or five channels that we could pick up with the antenna, depending on the weather, nor was there cable, at least not where I lived.

What we did have was the local movie theater where a person could spend an entire afternoon watching movies in air conditioned comfort, that is when the air was actually working. Most times the air was out and one of the back doors was propped open with a big fan that created a little bit of a breeze, as well as a way in for many of us without the funds to pay for a movie.

Sneaking in was how my friends and I were first introduced to the raw brutality (at least at the time) of Italian westerns that would later earn the moniker Spaghetti Western. Directed by Sergio Leone, and scored by Ennio Marricone, they were so much better, in my mind, than the weekly series Bonanza, and the Saturday reruns of The Rifleman, Rawhide, and Gunsmoke.


Sometimes I had the money to pay, others times I didn't but I can remember sitting in the darkened theater on a Saturday afternoon watching Clint Eastwood, The Man with no name, as he brought his own form of justice to a lawless land. During a three week span the local theater would run the Dollars Trilogy. A fistful of Dollars, For a Few Dollars More, and of course who can forget, The Good The Bad, and the Ugly. Sometimes if I was lucky they'd run all three in one day.

To this day I still like a good western. And whenever any of the old spaghetti westerns pop up on cable I'm glued to the set.

When were you first introduced to your favorite movie genre?
Posted by Richard Schiver

Email ThisBlogThis!Share to TwitterShare to FacebookShare to Pinterest
Labels: a fistful of dollars, Clint Eastwood, ennio marricone, for a few dollars more, sergio leone, spaghetti western, the good the bad and the ugly