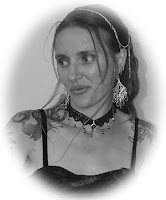 Each of her novels bring something symbolically Australian to her readers, from Aboriginal herbal remedies, to certain gemstones naturally only found in this part of the world.

Each of her books tell of a passionate connection between the hero and heroine, surrounded and threatened by deceit, scandal, theft and sometimes even murder.

These romances swerve from the traditional romances as Faye aims to give her readers so much more intrigue, whilst also revealing the hidden histories of rural townships of North Queensland.

Faye finds her inspiration from the histories of not only the township she grew up in, but the many surrounding it. She also bases most of her characters on people she has met in her life.

Faye was able to live her own passion driven romance, marrying the love of her life after a whirlwind romance in 2013. Together they are raising their 9 children in a remote country town in northern Queensland, Australia.

A.) Towards the end of high school.  That was when I wrote my first novel.  Took me about a week in English classes instead of doing school work.  It's also my newest release from Red Sage Publishing.

A.) Honestly is finding the time to write more than a few hundred words in one sitting.  And writing a synopsis - hate writing them.

Synopsis:
Murder, lies, deception, and love set in the outback under the Australian sun.

A past of stolen gold, lies, and murder joined their families together. It was a past that Devon Munroy and Lotte Higgins knew nothing about. All they knew was the passion they felt for each other. When Lotte is shot and dies in Devon's arms, his world is destroyed.

Four years later Devon has married the person his father handpicked for him, but he's still grieving for the woman he lost. He's a mere shell of the man he once was, his life having become a drunken haze without meaning. Then he meets a woman who reminds him so much of his lost love it makes his heart ache.

Lotte has been in hiding for years, but when more bodies began turning up around town, all brutally murdered, she knows it's time to bring down the person who tried to kill her. And Lotte knows who is was—the woman Devon is now married to. Changing her looks in order to keep her true identity hidden, Lotte takes a job in their home, hoping to find some proof of the woman's crimes. But can she resist Devon when she's so close to him? And when the truth comes out will Devon be able to forgive her deception?

A.) I literally jumped for joy and squealed out loud.

A.) I tend to concentrate on the story more, especially because I try to tie in other story lines other than just the main romantic theme.

A.)  Wake up about 5:30 am, do a bit of promo, make school lunches for the 6 children living with us, wake up the 7 (of 9) kids that live with us and get them to schpp; before returning home and trying to get a bit of writing in around school commitments and our 2 years old and my husband's shift work schedule.