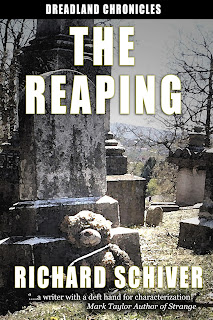 Upon the release of THE REAPING, book two in the Dreadland Chronicles, the first book in the series ALL ROADS LEAD TO TERROR, will be free the weekend of June 24, 25, and 26. Grab a copy and leave an honest  review before the end of July, and you will be entered into a drawing where one lucky person will receive this one of a kind 22oz sealed lid candy jar. I'll even sweeten the deal by throwing in the first 10 oz bag of your favorite candy. 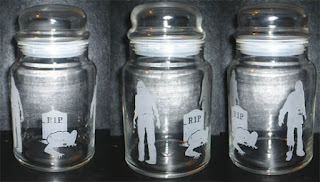 The three images are of one jar as the design wraps halfway around the jar.
Sandblasting is one of my hobbies and I shot this design myself.

I will ship this to the winner anywhere in the world, but the review for ALL ROADS LEAD TO TERROR must be on Amazon.com, and must go live by midnight July 31, 2016 . Based on customs I may not be able to include the candy. Sorry, that's the breaks. As an added bonus everyone in the continuous U.S who leaves an honest review will receive an autographed bookmark.(sorry I have to restrict this part, I just don't have the money for international shipping on everything)

You will find the particulars at the end of this post. So without further delay let's get on with this week's excerpt

In Bryn Mawr Window is infected when he is bitten by a Reaper. As he struggles against the rising blood lust, viewing his friends as a potential meal, they set out to the East in the search of a cure.

Along the way they learn more about the nature of the world they inhabit, their own past, and the part they each play in a potential future. Crossing paths with a shadowy figure who leaves small tokens from each of their own history. Little objects that carry powerful emotions linked to major changes in their past lives.

In the nations former capitol they are confronted by the master who reveals the cold truth about the cosmos as he prepares his own army of the undead to enslave what remains of mankind.

With the memories came knowledge of things that so far had remained a mystery to him. The reality of their world was no longer as firm as it had once seemed. A tenuous fabric that could be easily shredded at will, exposing the inner workings of their world beneath it, and the existence of other realities that were but a few short steps away, for someone with his unique abilities.

They were realities that bore little semblance to anything he knew. With his mind’s eye he had seen worlds where the natural laws that governed their own had been turned upon their head. Worlds where nightmare creatures roamed at will, where the night battled the day, and the shadows breathed with a life of their own.

He stood in a shadowy corner of the barn, away from the weak sunlight that burned his exposed flesh with a fevered touch. With his hand he moved aside the fabric of the world in which they lived. He giggled as his fingers slid behind the image of the wooden wall, a chill caressing his fingertips as they vanished from view.

“Are you all right down there?” Billie-Bob called from the loft above.

“Right as rain,” Window replied with a lilt in his voice. Closing his hand his fingertips bled through the surface of the wall as he giggled again with a strangeness that disturbed him. He heard Billie-Bob’s footsteps behind him as he came down the ladder from the loft.

Turning around it was easy to spot Billie-Bob as he approached through the shadows. No longer was the night capable of hiding things from him. He could see as easily in the dark as he could during the day. It was another of the strange developments that had occurred since he’d been bitten.

“Meat and Einstein went out to catch whoever's following us,” Billie-Bob said as he stepped closer to Window, “are you sure you’re okay?”

“Never been better,” Window replied. From Billie-Bob came a faint sound that had always been there, a familiar sound, one he had known his entire life, the strong steady beating of a young heart. Only now it was accompanied by the thrumming sound of blood being pumped through the arteries. Placing his hand on his chest he felt his own heartbeat thumping in time with Billie-Bob’s.

“Why are you staring at me like that?” Billie-Bob said, the steady rhythm of his heartbeat suddenly stepping up a notch.

“Like I’m a piece of meat and you’re a starving dog.”

I hope this helps to whet your appetite.

Before the end of July leave your honest review for ALL ROADS LEAD TO TERROR and send an email with the link to me at rschiver@gmail.com. The names will be placed in a hat, or jar, or bowl depending on how many I get and my wife will draw the winner. I will contact the winner on August 1st and will announce the name here.

It's that simple, get a free book, leave a review, and maybe you'll win. For those of you in the continuous U.S I'll also send an autographed bookmark, pictured below, just for your trouble. I know it's not much, but I'd just like to say thanks for taking the time to help me out.