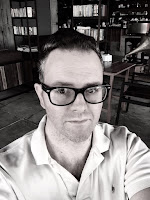 B.C. Kowalski is a science fiction and fantasy writer living in Wisconsin. His published work includes the Robot Awareness series and the short story The Sand Runner, just released. He is an award-winning journalist in his day job and rock climbs, trains in martial arts and takes photos. His work combines science fiction with his experience in journalism, sports and sports writing and all the characters he's met along the way.

A.)  It started with Anne Lamott's Bird by Bird. I hadn't written since I was a teenager. I think what the book accomplished was teaching me that it's OK to write something bad. You can always make it better later. It was a weight off my shoulders, and allowed me to get back into writing. Since then I started writing for my school paper as a non-trad, then started part-time as a sports writer. I graduated college and got my first journalism job. But since getting back to writing I've always written fiction too, in secret. Then I started talking about it. Then I learned about indie publishing, and realized I could just publish this stuff myself and keep writing. I've been doing that ever since.

A.)  Honestly, it's not the writing (other than carving out time), it's everything after. I'm sort of in a catch up mode - I'm publishing stories I wrote a couple of years ago - no matter how much editing I do I can never get those stories up to my current ability. I'm a better writer than I was three years ago, so part of you wants to say "I'm proud of what you're reading now but I'm writing much better stuff now!" Cultivating a fan base is challenging too. It's small but the people who do read it seem to like it. It's getting your work out there in the first place that's hard; making yourself stand out in a huge crowd of indie authors. The marketing takes more work than the writing! (Which is why I haven't done a ton of it - I'm primarily working on building my body of work right now...)

Synopsis: On the distant planet of Baando, a war rages between the United Alliance and the Veraqui, a ruthless race with a supreme hatred for humans, for the strategic stronghold in the war. Because of technology dampening fields, war is a primitive affair on Baando — no guns, no lasers, no advanced communication. Gina is a member of the UA’s elite Sand Runner program - a group of ultra-running scouts who can traverse the sands of Baando to check on enemy locations and deliver messages in a world that’s devoid of most technology. When Gina discovers a group of Veraqui has a prototype that could dissipate the dampening fields, giving the Veraqui a huge advantage, she’ll need to muster all of her training to deliver that crucial information to her superiors without getting caught by the Veraqui - a fate worse than mere death.

A.)  I'm a reporter and I've had new stories run in the USA Today, but selling a small number of copies of Robot Awareness, Part I was still one of the best feelings. Seeing the cover for the first time, making my first sales and getting that one review where the person really gets what I was trying to do - there's nothing that compares to those experiences. But it's mixed; it's a learning process. I thought all my friends would go out and buy my first book. Some did, but not most. But that's not who you're selling to, and you have to realize that. Getting a bad or mediocre review (only one three star so far, phew) can be tough.

A.)  For me, it's always been about the characters. In my work, they dictate the story. It probably sounds silly, but I've started writing a section and been completely surprised by how it's gone. They go in a completely different direction than I expected. I used to read interviews with authors I liked and they would write about how their characters had minds of their own and weren't completely under the author's control. I always thought that was silly but that's exactly how it is for me now. To me that's the fun of writing. And the fun of reading. Dickens was the master of character, and definitely an influence.

A.)  I'm lucky enough to be able to write for my day job. You very quickly get out of some very bad writing habits when you have editors . As a reporter covering government, then cops and courts, I've had the opportunity to meet plenty of people who've inspired plenty of characters over the years. The downside is that it can be tough to write all day, then go home and write some more. But since I've joined a weekly, it's a more relaxed schedule and I've found my writing production outside my day job has improved. Through my job I meet a variety of people, young, old, rich, poor, homeless, CEOs. People who are following their dreams, and people who have lost all hope. And they all influence my work. All of them.