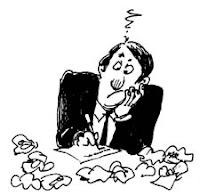 Aside from those who claim they were born with a natural desire to write and were penning full length novels before they were even out of diapers, I honestly believe most writers came to the vocation as readers.

When I was young I had a desire to create, but my interests were directed towards music. I started playing  trumpet in grade school, and though I never really mastered the guitar, I could strum a few chords. There was also a period on my life where I thought I could draw.

Don't worry, I'm not gonna share any of my art work here.

I've been a voracious reader my entire life, starting young about the age of seven, with comics that we now call graphic novels. I lived in a small neighborhood right on the outskirts of Washington, D.C. during the late sixties, early seventies, and quite honestly reading offered me an escape from the daily grind of being one of a handful of white students in a junior high that was predominately black. To say going to school was a tad dangerous would be an understatement. During the riots of the late sixties I can remember being bused to school under armed guard. There will be those who take offense to this statement, let them, I'm just relaying a simple truth from my childhood.

You see books provided me with the escape I needed to stay off the streets, in a sense they helped me survive my pre-teen years.

Many readers have at one time or another in their life toyed with the idea of writing themselves. Some will actually follow up on that thought by taking up the pen. Others will hesitate, not really sure which way to go, or what to do, after all you can't just wake up one day and call yourself a writer, can you? At the time I mistakenly believed that you couldn't. I thought there had to be some governing body, someone to rubber stamp that assertion, to make it official.

What did I know? I was young and dumb.

Fast forward some fifteen odd years and I was a young man of thirty, a veteran of the armed forces where I most likely consumed over a thousand books. While I was serving my country I always had a book handy and every pay day I'd take a trip to the PX to load up on more books. As I had little space for storage I'd usually pass on what I'd read to whoever wanted it. Life in the peace time military consisted of seemingly endless stretches of absolute boredom interspersed with brief periods of absolute boredom. You either slept or you read. Mostly we read.

The defining moment for me, that point when I finished a book and put it down with the thought, I can do better than that came in 1991. Do you remember the Zebra Books horror line? It was one of those. Stories slapped together behind garish covers that usually occupied the back the magazine racks in the local drug store.

It was the aha moment that one of my favorite authors, Stephen King so eloquently expounds upon.

Have you ever experienced an aha moment?
Posted by Richard Schiver