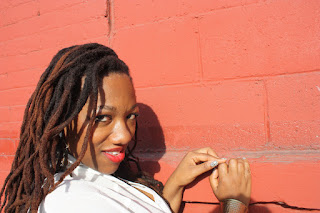 Desiree has been writing since before she could talk. Or at least, that’s how it seems. As a child, she’d spend her weekends making books. She’d scribble anything that came to mind on notebook paper and then staple all the pages together. Before she knew it, she had a stack of books.

In junior high, she graduated to writing terribly melodramatic novels in tattered composition notebooks. These books were a hit with her classmates, and they would spend more time passing around and reading the newest installments that they would spend actually paying attention in class.

Since then, she’d had short stories published in anthologies such as Lust Chronicles and The Mile High Club and her musings have appeared in publications like The Huffington Post and The Frisky.

While her early writing was mostly centered on naughty things, she’s since entered the dark and twisted world of the thriller. White Rabbit is her first novel.

When she’s not writing or reading comic books, she picking apart the storylines of her favorite TV dramas and movies.

And when she’s not doing that, she’s usually whipping up something scrumptious in the kitchen. She’s a rabid foodie who’s accustomed to receiving marriage proposals after having made someone, man or woman, a meal.

And when she’s not doing any of the above, she’s traveling. She loves her hometown of Brooklyn, New York but feels the need to get away three or four times a year, especially to the Caribbean where her family is originally from.

Harrison Ford was her very first celebrity crush, and she still loves him to this day.

She can recite the lines to the movie Annie, backward and forward.

She never backs down from a Scrabble challenge and once scored 75 points with the word clitoris.

Her prized possession is an official Star Wars replica lightsaber...in green, of course.

She’s a huge fan of professional wrestling and still watches WWE twice a week, religiously. She asks that you not judge her for this.

You can keep up with her antics at  desireemoodie.com

I've been writing all my life, but I'd say I only got serious about it two or three years ago. I resolved the finish the novel I'd been playing around with for years. But when I did finish it, I didn't think it was good enough, and so I went back to the drawing board for a few more passes. Then I hired an editor and finally published the thing. I'm currently working on the sequel.

Focusing on one idea though to completion. I get shiny object syndrome quite a bit.

Would you do the one thing you promised to never do again to save someone you love?

Logan Alexander is in exile.

It's a self-inflicted exile but an exile nonetheless.

As the most gifted hacker on the east coast, he’s made a few bad friends and even more of the worst kind of enemies.

A routine job takes a wrong turn, and the aftermath, Logan goes into hiding. With a terrible tragedy eating at him, he makes a vow never to repeat history. If he can just manage to stay away, to disappear for good, then no one else will ever get hurt because of him.

Or so he thinks.

One phone call is all it takes to change that. To change everything. Forever.

One phone call brings the ghosts from his past, the ones he’s been desperately running from, front and center. One phone call thrusts him back into a world he swore to leave behind. One phone call forces him back to the home he can’t bear to return to. One phone call presents him with an impossible job, and puts his family, what’s left of them anyway, in the gravest danger possible.

Logan tries to make things right, tries to prevent all hell from breaking loose, but it seems he’s doomed to take two steps backward for every step he takes forward.

Did he really think it would be so easy?

Spies and betrayals at every turn. No allies, no one to turn to. And the person he trusts least of all is himself.

Out of options, he plays his one final, desperate card. Disaster is inevitable, and Logan soon learns that true redemption is often elusive.

And sometimes paid for with blood.

And then it’s down the rabbit hole we go...

It's what I imagine  a new mother must feel like after giving birth. I cradled my Kindle in my arms as I read through my book and very nearly got weepy.

Story. You need compelling characters, don't get me wrong. But then something has to happen to them. They need something to do, something to accomplish. Characterization without story is just a glorified diary.

My story world? Or my personal world? Well in my story world, it's all about foiling the villain's evil plan. We don't rest until we do that. My personal world is a bit less exciting. I wake up, do my morning routine, write for 4 hours, take a three hour break, write for 4 more hours, then wind down and go to bed. I start it all over the next day. I try to take weekends off but that doesn't always happen.