This month I will be giving away one personally autographed print copy of book one in the Dreadland Chronicles, All Roads Lead to Terror: Coming of age in a post apocalyptic world.

February's winner has been selected and contacted.

The only way to enter is to join my mailing list. So sign up today and on April first I might be contacting you. And even if I don't win this month, you still get a free ebook just for signing up and you're automatically entered for every subsequent drawing. 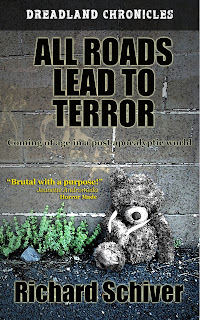 There are worlds beyond our own, existing for purposes outside of our understanding, where gods roam unfettered by the earthly restraints placed upon us. Where right is wrong, where the laws of physics have been turned upon their ear, and not everything that goes up, comes back down. Places where magic rules, and technology is but a faint memory from a distant past.

Fourteen years ago a cataclysm shook the realms of this multiverse as a rising tide of evil rose up to battle those in power. Many of the worlds ceased to exist in the blink of an eye. On our world the dead walked, bringing society to its knees. The technology we had taken for granted stopped working as a new dark age filtered across the land. An age of unrestrained brutality where the only law was the firepower one carried, and the only hope was for a quick death followed by a dreamless sleep.

In the dead city of Richmond Meat and his friends will confront a savage cult of children who worship a creature of the night. These creatures, once considered the nightmare imaginings of a fevered mind, are now awake in a world where the population that once served as their food source has been severely reduced.