Legion of the Damned: Excerpt #3

My goal had been to post another portion of the story I started last week, unfortunately the need to finish the final edits on Legion of the Damned, ate up much of the time I have available for writing. With that behind me now I can focus on finishing the story.

In the interim, here's another little taste of Legion of the Damned, coming May 31, 2017. Currently available as a pre-order at a special price of $.99 that will go up to the regular price of $2.99 the day of release. Reserve your copy today. Stay turned to the end of the post for a special offer.

I hope you enjoy it. 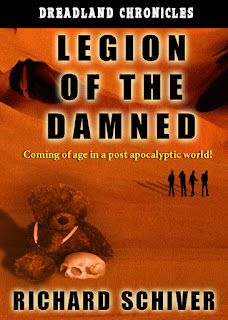 “Please,” he moaned as a solitary tear slid from the corner of his eye to trace a wet path down his cheek. As a child, he’d needed a night light to keep the creatures lurking in the shadows at bay, and as he had grown older, he thought he had been done with such childish things. Now, as he stood alone against the emptiness, he wished he could have that small light once again.

He shuddered at the thought as another emerged, sending a slow chill winding its way down his spine. With a light, he would be able to see what hid in the shadows and he realized then that sometimes it was better not to be able to see what waited in the dark.

He focused his attention on that single point of light, struggling to ignore the vast emptiness that stood behind him, and the denizens of the dark who sought the comfort his warmth could provide. Shadows passed across the face of that distant light as the steady sound of footsteps echoed through the emptiness. They faded in and out of focus, and he was reminded of what he’d seen when he crossed over.

He had returned to the interior of that cooler at the supermarket, Maria resting on his outstretched legs, but they were not alone. There was something else with them, something as old as the emptiness that shrouded them. Kneeling beside them as he comforted Maria in her final hours that ticked down with resolute steadiness. He had felt it as it caressed her battered and bleeding body, and the chill it awakened within him had taken root in the heart of his soul.

Those steady footsteps moved around him, circling him as the denizens of the dark backed away, and a single thought whispered through his mind.

Around him, it was as silent as a tomb, the only sound that of his heavy breathing, and the whine of terror whispering softly in his throat.

“I’m sorry,” he whimpered as the light faded from view and the emptiness behind him reached out to wrap him in its chilled embrace. The loss of sight served to heighten his other senses, and he heard something slithering through the emptiness behind him. His sense of touch and smell exploded, and he felt the chilled caresses of those nameless things that stirred the hairs on his arms causing them to stand on end. The odors of ozone and excrement combined to create a noxious smell that set his teeth on edge and left a metallic tang in his mouth.

As the darkness filled the void around him his emotional sense of empathy was double, tripled, until he was overcome by a primitive terror that let him feel their pain. They were the creatures of the night, forever imprisoned in the shadowy corners of a well-lit world, fated to a bleak future.

Hell was coming to Paradise!

In a remote desert world that bore little semblance to their own, the boys corner and kill Nickoli. Unfortunately the act fails to release Window from his curse, and they discover that a much higher price must be paid to free him.

Struggling to silence the voices from his past, Billie-Bob’s drinking results in his capture by the family of cannibals he once escaped from. This time he is taken to Paradise, a small compound along one of the many tributaries leading to the Chesapeake Bay. For those who lived there it was truly a paradise on earth, for its captives it was a different story as they were reduced to nothing more than livestock to feed a growing population.

While following the trail left by Billie-Bob’s captors, Meat, Window and Einstein come upon the shattered remnants of the church that had given them shelter on their trek north. Many of the church’s inhabitants had perished in the attack, but most of the children had been able to escape. They join the boys on their journey south to rescue Billie-Bob, and exact their vengeance on those who had shattered their peaceful existence.

Hell was coming to Paradise, and there would be no denying its vengeance.

Get all three books, over 550 pages of post apocalyptic adventure for less than the regular price of one. Order books one and two for only $0.99 each, and reserve book 3 for the same low price.

But you better hurry!
This deal won't last forever!


Fourteen years ago a cataclysm shook the realms of multiple universes as a rising tide of evil rose up to battle those in power. Many worlds ceased to exist in the blink of an eye. On our world the dead walked, bringing society to its knees. The technology we had taken for granted stopped working as a new dark age filtered across the land. An age of unrestrained brutality where the only law was the firepower one carried, and the only hope was for a quick death followed by a dreamless sleep.

It is into this world they have bee born.

Four boys who have grown up knowing the brutality of a society teetering on the brink of extinction. Each of them alone is but a boy, however, together they are a force capable of defeating the evil that is slowly spreading across the land.

While you're here, don't forget to subscribe to my mailing list.
Each month I give away a personally autographed print copy of one of my books to one person chosen at random from my subscribers.

I'll also give you a free copy of my novel White Walker just for signing up, follow the link below.