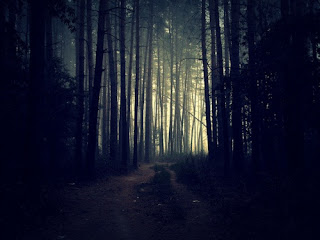 Sorry I haven't posted all week, sciatica has been having its way with me making it difficult to sit and concentrate on anything. But I did manage to get part 3 of the current story done. I hope you enjoy it, and I look forward to your comments.

Here's a link to the whole story if you would like to start from the beginning. Billy


After a breakfast of waffles with strawberries Billy was returning to his room when he stopped at the door to his sister’s bedroom. The mystery of what was waiting behind that closed facade had been dispelled when he’d come upon his mother standing in the doorway that morning. Beyond the door lay his sister’s bedroom as it was the day she passed away.

There was no secret forest, no babbling brook, no dark and slithering shapes that moved along the periphery. It was just a bedroom. Though the poster over her bed had disturbed him on a deep and primitive level, it was after all, just a poster.

Emboldened by what he had seen earlier he opened her door and slipped into the silent room. He stood just inside the door, letting his eyes adjust to the gloom, slats of morning sunlight lying across her unmade bed, segmented by the drawn blinds covering her window.

From beyond the window came the sound of everyday life, a lawnmower roaring as Mr. Winslow cut his grass. The Baker kids across the street yelling at one another as they played in their back yard. The occasional car gliding down the street as sunlight twinkled from the glass.

In her room it was as silent as a tomb.

To his right the door to her bathroom stood open, a white towel draped over the top, a pile of dirty clothes at the base. The bathroom was where they found her, and he flashed briefly on the memory of that night. The air alive with the crackle of radios as uniformed men moved down the hallway to her room. He had watched from his own room, the door slightly ajar, his parents standing to the side as the police and paramedics did their job. His father had wrapped his arm around his mother’s shoulder as she wept into her hands.

They brought her out on a stretcher, two paramedics maneuvering the wheeled gurney between them. He thought he would see her face and was disappointed when he realized they had wrapped her in a thick black plastic. After they were gone his mother and father  remained where they had stood the entire time the paramedics and police were here. The hallway beyond his room filled with their sorrow.

The memory receded like the waters of the ocean rushing out to greet the next incoming wave as he moved across the room towards the open bathroom door. He didn’t know what he would find, but when he stepped around the door to find a sparkling clean room he was relived.

Word was she had slit her wrists, lying in a tub of warm water as her life giving blood fled from her body. This he did not hear from his parents or anyone in a position of authority. It had come as most information did, via rumors and whispered gossip. So he was surprised, and not a little relieved to find the bathroom clean.

He didn’t know what to expect.

Turning from the bathroom his gaze tracked across the room until it came to rest on the poster over her bed. In the shadowy gloom of the room it glowed with a malicious intent. From the base of the tree came a hint of a breeze that carried with it the muted odors of decay.

He wanted to flee, to run from the presence of that poster, yet his feet had become rooted in place as the shadows around the tree slithered over and around one another with a sinister intent. It was calling to him on a dark, instinctive, level, drawing him to that emptiness like a moth to a flame.

He took a step towards the poster, his feet moving in accord to a sinister presence that offered little hope, and an eternity of despair. And though a part of his consciousness rebelled against everything this essence had to offer, he could not stop himself from taking another step closer.

He lifted his hand, reaching for the emptiness gathered around the base of the tree, his finger getting closer and closer. As his fingertip came into contact with the surface of the poster he felt a momentary resistance. It was overwhelmed as his finger vanished into the emptiness, and a cold chill washed the length of his outstretched arm, burying itself in his shoulder as the first knuckle of his finger slipped into the nothingness behind the wall. 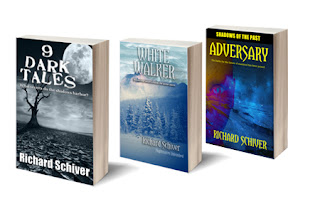