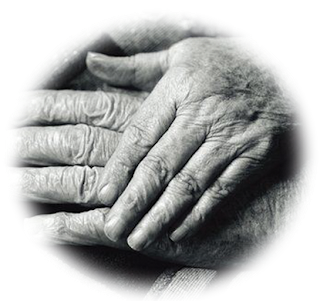 Covenant
Some promises are kept for a lifetime

“Archie,” Patricia’s voice shrieked through the plastic mesh of the baby monitor on the counter top. He had installed them to keep tabs on his wife when he wasn’t in her room, and she needed him. All she said anymore was his name and even that was becoming an increasingly rare occurrence. It was if the disease had not only robbed her of her mind, and her memories, but was taking her voice as well.

Doctor Patterson had said it would eventually come to that as the disease progressed through its varied stages.

With her sandwich and a pile of potato chips on the Styrofoam plate he placed them on the plastic tray he used for her meals. There was already a Styrofoam cup full of lemon water, and a Styrofoam bowl of butterscotch pudding. Next to the plate were two napkins, and the only utensil, a plastic spoon for the pudding. Anything with sharp edges had to be avoided. She was past the physically violent stage, almost completely bedridden, with the exception of her bathroom visits that she insisted on continuing, even though a bed pan was available.

Yet it was always wise to be careful.

With the monitor clipped to his belt he carried her tray down the hall towards her bedroom, and with every step the sadness settled deeper into his heart. She had once been a vibrant, loving, woman. A fiery redhead whose personality matched the color of her hair. To this day he was still in awe of the fact that she had chosen him over the array of suitors who were constantly at her beck and call.

At her door he paused, mentally preparing himself for what waited beyond the closed door. Once he was ready he stepped into the brightly lit room. The windows were open and a gentle breeze stirred the curtains as the steady sound of the oceans waves came crashing through. Birds twittered in the trees beyond the window as life contiued beyond the walls that surrounded them.

She had always loved the sound of the ocean

“Good morning Patricia,” Archie said as he placed her tray on the table next to her bed. The table was the kind found in every hospital, it looked like an angular letter C, mounted on four wheels that were capable of slipping under the hospital bed, so the surface could be brought close to the patient.

She watched him from the pillows under her head, her once vibrant red hair now the color of the sheets she lay on, her faced lined with age, eyes that once sparkled with a mischievous light now watched him with guarded mistrust as he moved around the foot of her bed, and crossed to the window.

“Is this too cold for you?”

She watched him silently as he pushed the window down, cutting off the sound of the ocean’s waves, and he turned to face her, the smile he’d plastered on his face faltering under her relentless gaze. She was in there somewhere, he knew it, it was just a matter of time before she managed to find her way back to him.

“I’ve brought you your favorite,” he said as he returned to the other side of the table, and settled into his seat as he slid the hospital table across in front of her. She looked from Archie to the sandwich, then back again.

He nodded at the sandwich and she cautiously picked it up from the plate, several pieces of chicken falling onto her chest as she brought it to her mouth.

After she had fallen asleep, he sought out the sanctuary of what she once called his man cave. Half the basement had been converted into a den of sorts for the assorted objects that Archie had come across in his travels.  The upper half of the walls were covered with signs from the past, advertising everything from Standard Oil to Wonder Bread, builds strong bodies eight ways. Beneath the signs, shelves overflowed with assorted small toys from the past, from cast iron to wind up tin toys all gaily painted in a variety of colors, many of which were also marked with the rust of neglect.

This was his sanctuary from the trials and tribulations of life and many a time he would just come down her and sit as he admired his collection, and listened to the music of the past, trying to recapture the innocence of the time period much of these items had come from.

His pride and joy was the nineteen forties telephone booth that occupied one corner of the room. It had been painstakingly restored to its former glory, its wood frame glistening in the light from a number of old style neon signs that were situated here and there among the other signs of the period. Every time he looked at the phone booth he imagined a line of GI’s waiting to use the phone for one last conversation with their sweethearts before they were shipped off the war.

An easy chair sat in one corner of the room, next to a bookcase filled with old volumes, and an old style table lamp whose surface reflected the light from above. Tonight he ignored the easy chair and turned towards the phone booth whose bench seat offered very little comfort.  The interior still smelled of old smoke, sweat, and the spilled tears of many a brave boy marching off to war. The phone mounted in the corner was black, its box like body designed with an eyes towards function over fashion.