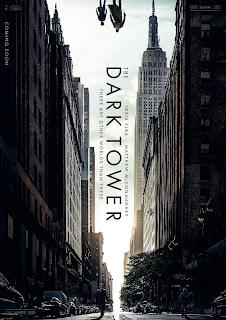 I've been a fan of Stephen Kings work since the mid seventies when I was in the military. Anyone who has served knows military service is comprised of long periods of unrelenting boredom punctuated by brief moments of sheer terror. It's during these down times that most people turn to books as a way to pass the time. I was no different and quickly amassed a library of paperbacks that followed me around the world. You always had a book handy for when it was time to hurry up and wait.

I see you there in the corner nodding your head, you understand what I'm talking about.

As a fan I read each of the  Dark Tower books as they were released, following Roland of Gilead in his travels as he sought out the man in black. So it was with a mix of trepidation and excitement that I watched as The Dark Tower movie came into being. I've seen many of the movies based on his books, and with the exception of The Shining, most were failures. Which I can understand, Stephen King is a writer whose prose tends to draw you into the story, making you feel as if you are a part of the action. A feat that is very difficult to pull off on the screen. There is an intimacy in his work that you either get, or you don't.

So back to my thoughts about the movie.

On my day off I attended the noon showing of The Dark Tower. I'd read the reviews, saw the low ratings on rotten tomatoes, but I had to see for myself. My first clue that things were amiss was when I entered the theater to find only three other people there. About twelve more showed up before the movie started. Of course the time of day could have been a factor, I kept hoping.

To say I'm disappointed in what they did, would be an understatement.


For those who haven't read the dark tower series I believe the movie would be great to see. It's got everything one would want in an action fantasy. The misunderstood child whose dreams are in fact reality. The brooding hero who grudgingly accepts the task of protecting the child. A villain everyone loves to hate, a man who can kill with a word, and doesn't hesitate to do so. And whose only purpose in life is to destroy that which stands in his way, while at the same time taking down the hero.

The use of the children to attack the tower was reminiscent of The Shining and its sequel Doctor Sleep. Of course that psychic ability Uncle Steve refers to as The Shine, and alternate realities are a common thread that populates much of his work.

But if you've been a King follower for any length of time you will likely be sorely disappointed by the movie. While it's an action packed thrill ride that adheres to the main thread of the series, with impressive special effects, and likable characters, it falls far short of the depth and breadth of the book series. It might have been better to not even link it to the series, instead of saying based on The Dark Tower series by Stephen King, in the opening credits maybe they should have went with inspired by.

But there's enough there I believe, to draw new readers to the series to find out what all the fuss is about.

The previews for IT were astounding. Hopefully it fares much better than The Dark Tower.

Overall I rate the movie a solid 3.5 stars. 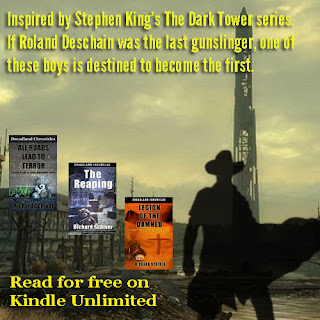 Read for free on Kindle Unlimited

The Dreadland Chronicles is a post apocalyptic dark fantasy inspired by Stephen King’s Dark Tower series, that seeks to answer the following question.

If Roland Deschain was the last gunslinger, who will be the first?

They are three, bound by a fourth, coming together in a post apocalyptic world to confront a growing evil that threatens to destroy mankind once and for all. But can they overcome their own differences in time to save their world, and the fate of all the others?

Fourteen years have passed since the dead walked, and obscurity means survival in an increasingly dangerous world. For the survivors compound at Bremo Bluff that obscurity is threatened when a group of children are abducted.

Four boys embark on a quest to rescue the children. A journey that will lead them into adulthood, with a brief detour through the Dreadlands, as they come face to face with the harsh reality of a brutal world beyond the barriers that had served to protect them.

In the dead city of Richmond they will face a savage cult who worship a creature of the night. They are not gods, nor are they demons. Born of despair these creatures lived along the shadowy edges of our well lit world. Where misery dwelt hand in hand with anguish.

When the dead walked, and man fled the cities to the east, he left behind an offspring of man’s despair. Once viewed as the nightmare imaginings of a fevered mind, these creatures were now awake in a world where the population that served as their food source has been severely reduced.


Read for free on Kindle Unlimited!