G is for God is Dead Part VI

Author Note: Sorry for the delay in getting this segment out. Had some issues with Word on my computer and wound up having to do a complete reinstall.

What follows is a brief foray into the world the four boys from my post apocalyptic series inhabit. A world of unrestrained brutality where death lurks at every turn, where the only law was the firepower one carried, and the only hope was for a swift death followed by a dreamless sleep.

On a lonely country road four boys reach the edge of reality.

“Where are his followers?” Window said, spreading his arms wide as he slowly turned around in the deserted church. “Where are these true believers?” Window stopped, having turned all the way around until he was facing the priest once again. His arms still outstretched he glanced left and right.

“Are they hiding in the shadows”

“They’re here,” the priest answered, “they’re all around in fact, don’t you see? It’s the second coming. As it said in revelations twenty, twelve, and thirteen.

The priests voice rose as he quoted the passage, “And I saw the dead, the great and the small, standing before the throne, and books were opened; and another book was opened, which is the book of life; and the dead were judged from the things which were written in the books, according to their deeds. And the sea gave up the dead which were in it, and death and Hades gave up the dead which were in them; and they were judged, every one of them according to their deeds.” As the echo of his voice faded into the shadows the priests turned to the windows at the front of the church.

“They have come to be judged,” he whispered as he crossed to the window and gazed out at the growing crowd of the undead who waited yards from the front door.

“This guy’s off his rocker,” Einstein said as he twirled his finger around his ear.

“You’ll get no argument from me," Meat said as he watched the deep shadows around the statue. They had to get out of there, fast, the sanctuary they sought would not be found here.

“You need to leave,” the priest said as he turned from the window and stepped to the door, “the time of their judgment has arrived.” The snap of the lock being drawn back was loud in the church and the priest was opening both front doors, allowing the light of the setting sun to push back the shadows as briefly glimpsed objects scurried about frantically to escape the encroaching light.

He stepped through the door, his arm spread wide as he approached the undead who stood waiting.

“Welcome my children,” he said, “you have found your salvation, your journey has come to an end.”

The undead remained rooted in place, watching the priest with cataract coated eyes, those that were lucky to still have them. If this was salvation Meat didn’t want any parts of it.

“Let’s get out of here,” Meat said before turning to the deeper shadows crowding the back of the church.

“Where are we gonna go?” Einstein said, turning to watch meat as he vanished into the gloom. “I don’t think that’s a good idea,” he said.

“What choice do we have,” Meat shot back, his word punctuated by the sound of a door opening.

Window and Billie-Bob remained rooted in place, watching the priest as first one, then another of the undead approached him with staggering steps. The priest stepped back, keeping his distance as more of the undead followed him into the church.

“That’s right my children, come to me, you have been abandoned by the one you followed, left to wander aimlessly, lost in the wilderness of ignorance. I have found the one true god, here in this little church, he has spoken to me as he will speak to if you will only open your hearts to him.”

The priest stepped through the door backwards, his arms upraised, palms out as he spoke in a fevered voice and the undead followed him in an orderly manner.

“Dammit, come on, let’s get out of here,” Meat said, breaking the trance Window and Billie-bob had fallen under as they watched the priest leading the undead into the church.

“Let’s go,” Window said, pulling at Billie-Bob’s arm as he turned to follow the others. Billie-Bob followed reluctantly, struggling to pull his gaze from the spectacle that was playing out in the church behind them. The crowd of the undead was growing as the priest continued to cajole them to follow him into the church. Spreading out to fill the emptiness.

The shadows enveloped them, slithering across their bodies as it wrapped them in ebony embraces.

“That’s right my children, accept the eternal life the one true god has to offer you. Embrace his essence for the god you once followed is dead, and another has risen to take his place.”


The four boys featured in this story appear in my post apocalyptic coming of age series available from Amazon. 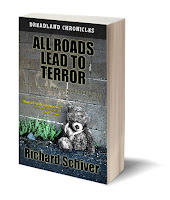