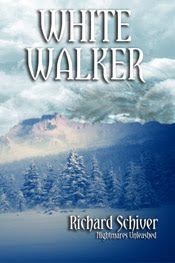 Synopsis: When she was ten she made a promise to that which inhabits the winter storm. Now she's twenty-six and pregnant, and the White Walker has returned to collect his due.

For Teddy a routine day becomes anything but when a severe blizzard shuts down the region as old man winter refuses to relinquish his grip. But this is no ordinary winter storm, for within the shifting winds walks a prehistoric deity once worshiped by ancient man on the windswept Siberian plains, coming to collect on promises made.

As the winter storm rages around them the employees of the call center watch helplessly as their numbers dwindle. The building they inhabit stands on the exact spot once occupied by a one room school house that had burned to the ground during a similar storm over a hundred years before. The ghosts of the children who perished in that fire appear and the call center workers become trapped in a battle between fire and ice.

Cut off from the outside world, stalked by the ghosts of the past, the survivors are forced to abandon the safety of a building that has been stressed to the breaking point.

But how does one escape a winter storm?

From the outer wall came the shrieking cry of the wind as it battered itself against the building. It was a distant sound that brought to mind the image of a windswept plain across which a solitary figure staggered against the wind.

The image filled her with such a sense of loneliness, of loss that weighed down her heart, a forlorn emptiness without end. From the freezing depths of the endless Siberian winter, this lonely wanderer had come to this place in its never-ending search for the warmth of the living. Over the centuries he had gone by many names that had been celebrated and feared. He was the essence of the winter wind, the driving snow, and the relentless cold. Feeding on the souls of all who became lost in his raging storms. He had been known as the White Walker, the White One, Jack Frost, and Old Man Winter, as well as a long list of names lost in the faded memories of the distant past.

“Jasmine, come here.” David’s voice pulled her from her thoughts and she knelt down to retrieve her dress. She slipped it on, glancing at her bra still lying on the desk; she shrugged and pulled her dress on the rest of the way. In the back of the room she found David peering into the dense shadows that crouched in the corners. From their inky depths came the unmistakable sound of a child sobbing.

“Where is she?” Jasmine said.

“Right there in the corner.” David pointed, his arm a darker shadow against the velvety emptiness. “Come here, little girl, we won’t hurt you.”

“How did a little girl get in here?” Jasmine said as she tried to make out the child but saw only shadows. Then she felt it, on a deeply emotional level, a terror that washed over her with a blind panic.

He was coming. The thought whispered in her mind and she knew, on a deep, instinctive level, the child was afraid of that which inhabited the storm raging beyond the walls of the building.

There was movement in the deeper shadows as a black shape stirred in the darkness. It came towards them and Jasmine was suddenly filled with a desire to flee, to run away from what was unfolding in front of her, but she stood her ground, quashing her own fear as a little girl, no more that five, emerged from the deeper shadows.

“You’ll be safe now,” David said as he extended his hand to her. She reached for him, one small hand held out in the gloom and Jasmine had a moment to reflect that something was terribly wrong here. There were forces at play beyond her comprehension. A confrontation was brewing and they were stuck in the middle.

As the girl reached for him a wicked smile spread across her face. Jasmine was nearly floored by the raw power of the rage that emanated from the child’s silhouette. She reached out to stop David, one last attempt to save him from the fate that awaited, but that all-consuming rage kept her arm in check.

“It’s okay, sweetie,” David said as the little girl’s hand was folded into his own.

He started to stand, that self-assured expression on his face dissolving into a grimace of pain as small wisps of smoke rose from his arm. The sickening smell of roasting flesh filled the room. The little girl vanished from sight, dissolving into the shadows as David dropped to his knees and clamped his hands to either side of his head.

Grab your copy at any of these fine retailers.


Get a personally autographed copy for only $10.99 with free shipping to the lower 48 states.
Drop me a line at rschiver@gmail.com for full details