Review of Dead: The Ugly Beginning

Synopsis: The unthinkable has happened. The dead are walking! Humanity's fragile thread may be reaching its bitter end. Individuals and groups struggle to survive...some at any cost. Will there be anybody left? Or, is this just...The Ugly Beginning? The story is told through the eyes of several different groups of survivors scattered across the U.S. Mixed in are a number of vignettes that explore the varying depths to which man is predisposed to stoop to when all the conventions of civilized humanity are stripped away. 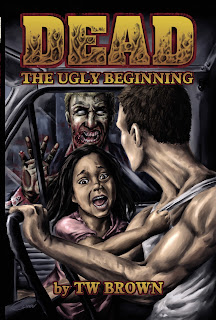 Review: I will preface my review by admitting that I’m not a big fan of Zombie fiction.  I have read my share of it in the past and will acknowledge that T.W Brown, does a pretty good job of writing a compelling tale that will draw one into the story. His use of a group of nerds already familiar with Zombies adds depth to characters that are well drawn and wholly believable. I will admit there were a couple of confusing moments where I lost track of the characters and had to backtrack to recall  them. Of course that could be because I’m getting older and you know what they say about us old folk.
My biggest problems with the work were mechanical in nature.
The first being the way the story constantly switched from past to present tense and back again throughout the whole book. The author did do a passable job of keeping the tense switches divided but there were a few times when he switched tense in the middle of a paragraph. These switches constantly threw me out of the story. Had he chosen to remain in past tense I feel the flow of the story would have been much better.
The second problem I lay at the feet of the publisher. That is the formatting errors that plague my kindle copy of the book. Numerous words that should not have been were hyphenated, and entire sections of text were formatted in block instead of  first line indent format. I received my copy on 1/28/2012 as a free download. The book was originally published on 4/22/2010 and there were several reviews that mentioned the formatting errors published before I got my copy which gave the publisher ample time to contact Amazon and correct these issues.
Posted by Richard Schiver