Do characters in a novel read?

Do they listen to music?

Do they reference works by real authors or do you, as the writer, make up a fictional author for your character to read?

Personally I believe it’s okay to make reference to popular creative figures in the real world. To me it lends depth to a fictional character to recall their reaction to a given scene in a movie, or passage from a book, as they move through your story. After all if the same thing were happening to you, wouldn’t you automatically compare what was happening with a scene from a movie you’d watched? Or a book you’d read?

I’ve been a fan of Stephen King's work since I first read one of his short stories in a Men’s magazine when I was stationed in Texas with the U.S. Army. Since then I’ve followed his career, purchasing and reading everything he wrote. He is the ultimate storyteller, an American icon, and a prolific writer with an amazing output.

He is the reason I write. Not for the money. Or the fame. But because during a sitcom whose name escapes me at the moment, the story line dealt with the death of a pet. The children wanted to bury their pet in the backyard, but the mother refused with the line.

That right there is how I would like to be remembered for my work. It is why, in my novel Shadows of the Past, I make references to two of Stephen King’s works, my simple way of paying homage to a man who has inspired thousands to write, though some would never admit it.

Can you figure out which two?

In the next two weeks I’ll be starting a month long giveaway for all those who can answer that question.
The prize will be a $25.00 Amazon gift card and a paperback copy of Stephen King’s Under The Dome delivered to your door. It’s slightly used, the corners of the cover have curled a bit, but it was a good read. 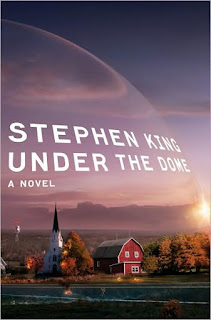 Once I’ve sorted out the details I’ll be posting more info right here. So check back.