My novella, Reprisal: Vengeance knows no boundary,  is now available from Amazon.

Revenge is a dish best served cold, and what could be colder than the chill from beyond the grave?

On the surface her plan was brilliant in its simplicity. Return home, take the place of her twin sister, and live out the rest of her life in relative peace. Unfortunately even the best laid plans had their flaws and this one involved Margaret’s alter ego Candice, who was hell bent on leaving a bloody trail in her wake. But not even Candice had planned for one simple fact. 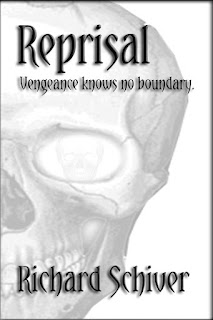 Diagnosed with Dissociative Identity Disorder at an early age Margaret could honestly say she had never been alone a single day of her life. Like two peas in a pod she shared her physical self with the other half of a divided psyche, a separate personality known as Candice. The difference between them was like that between night and day. While Margaret exuded the wholesome innocence of a country bred farm girl; Candice portrayed the character traits of a manipulative, conniving, sociopath whose only concern lay in doing what was best for herself.

Though Margaret physically killed the handyman who raped her when she was seventeen, her alter ego was responsible for the act. Thirty years have passed and Margaret is serving a life sentence for the killing she had managed to keep under wraps for seven years. She is confined to a Mental Health facility where a new doctor has been assigned to her case. One of his first acts is to reduce the dosages of the medications that have  kept Candice suppressed.

Candice seizes control and embarks on a murderous rampage as she seeks to regain the life that had been stolen from her. She leaves a trail of bodies in her wake as she returns home where the dead wait patiently for her return.