Since most hauntings are associated with brutal or unexpected death is it any wonder that battlefields are some of the most haunted places in the world? Since the beginning man has waged war. And with each succeeding generation the technology of dealing death has become increasingly brutal. From rocks and spears to swords and maces. From bows and arrows to Gatling guns capable of firing over a thousand rounds a minute. Death on the battlefield is often swift, unexpected, and brutal.


One of my favorite stories growing up was a comic about an American patrol in the jungles of New Guinea. Outnumbered and outgunned by a superior Japanese force they were about to be overwhelmed when the unmistakable roar of a fifty caliber machine gun cut through the dense jungle blunting the Japanese attack as the rounds shred the advancing enemy. No one knew where the fire came from until they discovered the wreckage of a B-25 bomber that had crash landed in the jungle a year or two before. In the tail section sat the skeletal remains of the gunner sitting behind the smoking barrels of his twin fifties.

From Waterloo to Guadalcanal, from Antietam to Baghdad, wherever men have fought and died, many of their spirits have remained to guard the night. And the hauntings are not restricted to geographical locations. Listed below are a two weapons of war, floating cities that carried their country's message to the enemy, now docked they each serve as a museum. And each one is haunted.

USS Yorktown CVS10: Launched in 1943 and originally named Bon Homme Richard, she was renamed to commemorate the original USS Yorktown (CV5) that was sunk by enemy action during the battle of Midway. The ship participated in the pacific theater of action earning 11 battle stars during WWII. She earned 5 more during the Vietnam conflict. A total of 141 men lost their lives aboard the Yorktown that is now docked in Charlestown South Carolina. 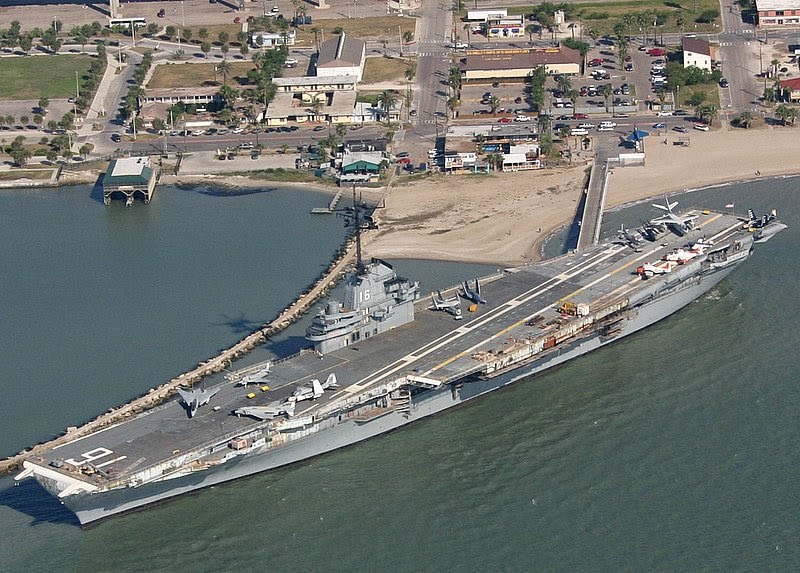 USS Lexington CV16: Nicknamed The Blue Ghost due to her blue camouflage she was originally slated to be named USS Cabot, but when word came during her construction of the loss of the USS Lexington CV2 during the Battle of the Coral Sea the decision was made to rename her in honor of the lost carrier. She is the fifth naval ship to bear the Lexington name commemorating the Revolutionary War Battle of Lexington. She is currently docked as a floating museum in Corpus Christi, Texas.