We've visited a number of old insane asylums in our travels, coming to understand that wherever there was misery and death, ghostly apparitions were sure to follow. The walls of these places having absorbed the despair of its former occupants. Some had been placed within those walls for their own good, unable to care for themselves, requiring constant supervision. Many others had been abandoned by their own families. Committed not because they needed to be, but because they were in the way, so to speak. Innocents imprisoned for the crime of existing.

At the other end of the spectrum are the hardened criminals who deserve to be locked away to protect society as a whole. Men and women with no regard for anyone or anything but themselves. And one such place is Eastern State Penitentiary in Philadelphia, Pennsylvania.

Originally constructed in the early 1800,s the prison was operated under the Pennsylvania system from 1829 to 1913. A system centered on solitude that the designers felt would force the inmate to look within and find god. Yet the solitary existence was enough to make a sane person insane.

Confined to a single cell for twenty three out of twenty four hours, there was but a single slit in the ceiling through which the sun would shine, and was referred to by many as the eye of god. Before they could leave their cell a black hood was placed over their head to prevent communication as they were guided through the prison. 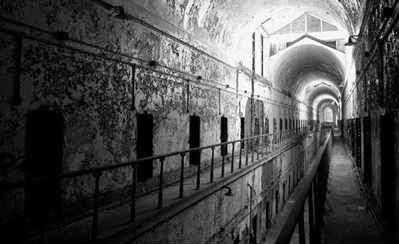 Communication between inmates was an offense punishable by the cruelest form of torture. An iron ring was clamped around the inmate's tongue, their wrists were then bound behind their head and attached to the ring. Even the slightest movement would result in a tearing of the tongue. Many inmates died from loss of blood as a result of this punishment.

Other punishments included The water bath, an inmate was dunked into ice cold water then chained to a wall overnight. During the winter when this punishment was most popular the water on the inmates flesh wold freeze overnight.

The mad chair, so named  because many inmates were driven insane if they survived the punishment. They were strapped to a chair so tightly with leather straps that even the slightest movement was impossible. Forced to sit for days with no food in almost all cases circulation to their extremities would stop resulting in amputation or death. 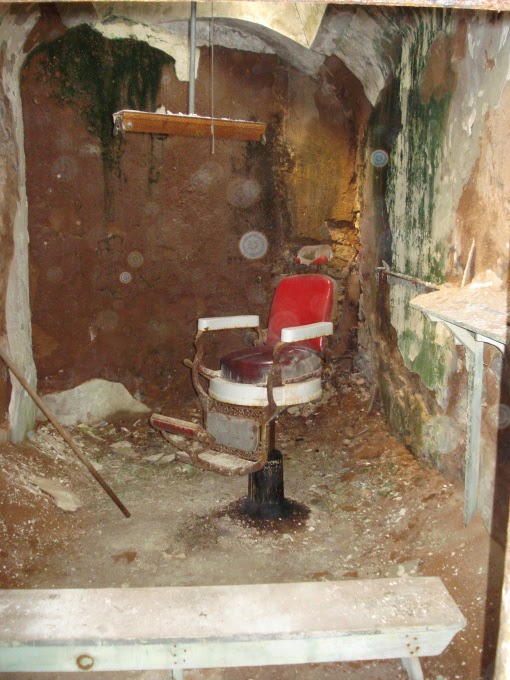 Prior to its reform in 1913 the prison, which was designed to hold 250 inmates, was crammed with over 1700 inmates in tiny makeshift cells with little light or ventilation. In 1971 the prison was closed for good. Since that time there have been reports of weeping, giggling, and whispering coming from within the prison walls.

A locksmith changing  the 140 year old lock on cell block #4 reported being overcome by a malignant force that prevented him from moving. Anguished faces appeared on the walls of the cell block as shadowy forms swirled around him, and an overpowering entity beckoned for him to come to it. Many believe when he removed the lock he released the trapped spirits within the cell block.

Today the penitentiary is open to the public. More information on tours is available at
http://www.easternstate.org/home