New Discovery: Who Goes There by John W Campbell.

I guess what I really should say is new 'old' discovery as John W. Campbell's novella Who Goes There, was originally published in Astounding Stories in 1938. It is purported that he wrote Who Goes There in response to H.P Lovecraft's novella At The Mountains of Madness that had been published in Astounding Stories in 1936, to show Lovecraft how a story of that nature should be written.

Campbell's story Who Goes There served as the basis for the 1951 movie The Thing From Another World, that John Carpenter remade in 1982 as The Thing.

What makes this release unique is that before John Carpenter became involved in the remake, Universal Studios approached William F Nolan, who had recently garnered a great deal of attention with the release of the movie Logan's Run for which he'd written the screenplay. The print version contains a forward by William F Nolan as well as his treatment of the proposed screenplay that Universal passed on in favor of John Carpenter's version.  Nolan's take on Campbell's story downplays monster elements in favor of an "imposter" theme, in a vein similar to The Body Snatchers by Jack Finney. The forward and treatment is not available in the kindle version, I purchased a copy hoping to find the treatment by Nolan only to be disappointed. 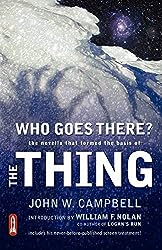 Click on the cover to grab a copy for yourself.

Issac Asimov called Campbell, "the most powerful force in science fiction ever,." and his novella Who Goes There proves the point.
Posted by Richard Schiver