Reaching the mid-point of our little journey we come upon Jason V Brock and his latest release, Milton's Children.

A seafaring expedition to the Antarctic takes a detour during their return home to investigate a chain of uncharted islands. The landing party finds amazing animals – including gigantic, undiscovered species of what seem to be either very bizarre birds or flying reptiles. They break up into two groups to explore the landscape, and when one group fails to return, the others decide to camp on the beach for the night and wait for a helicopter rescue in the morning. . .

When the chopper arrives, there is no one to be found – only a gruesome aftermath, and the scientists’ cameras and notes. Upon reviewing some video taken by the original party, the few remaining crew members learn that these creatures are much more than anyone could have imagined. 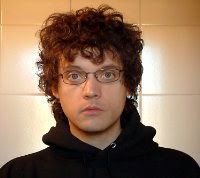 Brock's films include the highly-regarded documentaries "Charles Beaumont: The Short Life of Twilight Zone's Magic Man"; "The AckerMonster Chronicles!" (about legendary agent and "Famous Monsters of Filmland" editor Forrest J Ackerman), and "Image, Reflection, Shadow: Artists of the Fantastic" (featuring H. R. Giger, Roger Dean, Ernst Fuchs, and many more artists from all over the world). An artist and musician himself, Brock has had multiple showings of his artwork and illustrated his own books in addition to creating posters and packaging for his films and his former progressive rock band, ChiaroscurO.

A health nut and gadget freak, he lives in the Portland, OR area, and loves his wife Sunni, their family of reptiles/amphibians, and practicing vegan/vegetarianism. Visit his website at http://www.JaSunni.com .