As the eighth day dawns let's turn our attention to author Vince Font and his latest release, Gnome Way Out. 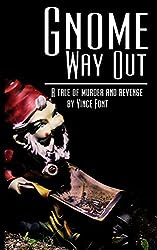 Click on image for more info or the order.

Synopsis: When Henry Keller murders his wife and buries her in the backyard, he incurs the wrath of a terrifying supernatural force that will not rest until retribution has been served. "Gnome Way Out" is a dark tale of murder, revenge, and killer lawn ornaments. Rated “R” for harsh language and bloody violence.

Vince Font is a freelance author with a flair for quirk and the inability to ignore spelling errors. He prides himself on rarely using spell check, but occasionally pays the price for trying to walk the tightrope without a net. A former rat-race runner and professional technical writer, Vince transitioned into the world of freelancing to escape what he calls "slow death by brain rot." Operating happily from his home office, Vince shares living quarters with his wife and two dogs and prides himself on being a better writer than half of his household occupants.

He is a frequent contributor to a variety of online publications including Renewable Energy World and TechnologyGuide.com. His first book, American Sons: The Untold Story of the Falcon and the Snowman, is available now in e-book and paperback through Amazon.