Shall we begin with a traditional vampire that is anything but. This is not Twilight, there are no sparkly vampires here, only NYPD Forensics expert Lilith Adams who is not exactly human and the lead in Jenny Allen's Lilith Adams Vampire Series.

Synopsis: NYPD Independent forensics expert Lilith Adams may not be exactly human but it hadn’t made her life any less monotonous. The nights and bodies just bled into a dull and seemingly useless existence. All she wanted was a real mystery to chase, a purpose. Everything is about to change and her quiet little life will never be the same.

When her uncle goes missing from a small town in Tennessee, Lilith's doting father sends her to investigate with his head of security, Chance Deveraux. They quickly find themselves caught in a whirlwind of violence and terror that uncovers a secret that's been buried for over 600 years. A vengeful secret that could very well cost her everything. To survive, they'll have to find powerful new allies, but trusting them might be the biggest mistake of all.

Blood Lily is a suspenseful mystery that completely redefines classic supernatural elements and myths. It challenges every relationship and deals with the true emotional grit of loss when the odds seem overwhelming.

Synopsis: When Lilith Adams accepted Detective Andrew Cohen’s help to defeat the horror from her father’s past, she knew she was making a deal with a devil. Now the true price of his help has come to light and the cost is beyond anything she could imagine. Lilith and Chance are forced into the service of a mysterious council whose cold brutality surpasses Ashcroft’s maniacal revenge in their rabid desire for the Voyurich Manuscript.

The book, authored by Lilith’s uncle 600 years ago, is not only incomplete, but also missing, due to a high tech robbery that has left baffling bodies in its wake. Now Lilith and Chance are scrambling for every lead as the impossible becomes real and everything that was once buried comes crawling into the light.

Nothing is guaranteed in the desperate race for the power hidden in the enigmatic book that holds all the ghosts of not only the past of Lilith’s family but Cohen’s as well. Every loyalty and bit of sanity is tested in the violent whirlwind of gripping terror that Lilith and Chance are thrown into. Caught between emotion-feeding demons, a vicious siren and an actual voodoo witch with a terrifying power, the real question is who will be left standing when the storm passes.

A little about Jenny: 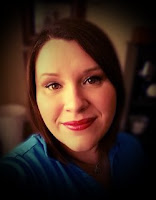 Jenny Allen is the author of Blood Lily and Rose of Jericho as well as several published poems and short stories in University journals. She also spent time as a reporter and photographer for the Chattanooga State College newspaper. Ms. Allen has studied forensic science, done extensive research in world cultures and myths, and is currently pursuing a degree in Registered Nursing. Her background as a published photographer and an award winning artist helps her visualize the scenes when writing, contributing to her unique style of vivid imagery.

Born on a Royal Air base in Lakenheath England, she left the U.K. at the age of 9 to travel all over the United States and Germany. She turned to writing poetry after the suicide of a close friend in her sophomore year of high school. She graduated to short stories and narratives until, in 2002, she wrote her first novel, Lilith in London, which was never published. Over the course of twelve years the novel underwent a lengthy metamorphosis, eventually becoming her first published novel, Blood Lily.

Jenny Allen attributes her success to the people in her life that provided not only encouragement, but constructive criticism including longtime friends Jason Ratcliff, Emily Kirk, Matthew Pace, Travis Tramble, Adrian Stranik, Chris Howard and Robin Sullivan.
Currently, Ms. Allen is a single mother living in York, Pennsylvania, writing between semesters of college. She hopes to continue her book series while pursuing her medical career.


Join the fan club at https://www.facebook.com/LilithAdamsSeries


Blood Lily by Jenny Allen
The Misadventures of Bob by Jaime Johnesee
A Jar of Fingers by C.L. Hernendez
A Coin for Charon by Dallas Mullican
The Human Condition by Mark Taylor
Spook Lights by Eden Royce
In the Hands of the Unknown A.E. Hellstrom
Winchester Over by Dave Lund
The Complex by J Rudolph
The Dead Song Legend by Jay Wilburn
Zombie and Chainsaws by Mike Evans
Flight of Destiny by Francis H Powell
Through a Mirror Darkly by Kevin Lucia
Awfully Apetizing by Leod D Fritz
Darkly Wood by Max Power

Have you read Shadow out of the Sky?
https://www.amazon.com/dp/B00RB2PISY
#2015HHAC #BookBoost

During the month we will track everyone's activity, assigning each action a number and at the end of the countdown a random number will be drawn. The person whose name appears next to that number will be the winner.
There may also be daily contests as a couple of authors have expressed a desire to hold smaller giveaways on the day of their post. So check back often and enter as many times as you like by tweeting about the contest, don't forget to use the hashtag #2015HHAC so your tweet will be counted.