We interrupt our regularly scheduled programming to bring you this special announcement from our sponsor.
ALL ROADS LEAD TO TERROR
Coming of age in a post apocalyptic world

The horrors of the past meet the brutality of the present.
The world had become a wild place filled with wild things, and into this new reality each of them had been born. Growing up in the time after, adventurers in an old, new, world. Coming of age at the end of days, where savagery was the norm, and man’s inhumanity to man was on daily display. Where the only law was the firepower one carried, and the only hope was for a swift death followed by an endless sleep. 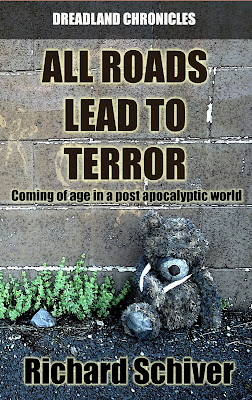 Upon his birth at the height of the Zombie Apocalypse, his mother took one look at him and pronounced him Meat. He survived, she didn’t. Accompanied by his three friends Window, Einstein, and Billie-Bob, Meat embarks on a quest to rescue several young children kidnapped from the compound where they all lived. A quest that will lead them into adulthood, with a brief detour through the Deadlands, as they confront the harsh reality of a brutal world beyond the barriers that had served to protect them.

It's been fourteen years since that day in March when civilization crumbled and the dead walked upon the face of the earth. Mankind continues to struggle as it pulls itself from the brink of extinction. Pockets of humanity attest to the uncanny persistence of life as a once powerful society works to reestablish itself. Exploring this new reality, establishing trade with other compounds in every direction on the compass except for the East. To the East lays an unknown world, known only as the Dreadlands, a land of mystery where many had ventured, never to return.

The trail leads Meat and his friends East, to Richmond, where they will be confronted by a savage cult of children who worship a creature of the night. A creature that until the apocalypse had existed in the shadowy corners of a well lit world. Feeding on the fear of its victims, delving into their innermost secrets, exposing half forgotten terrors that lay like a rotting carcass at the heart of their very souls.

Their only hope for survival lies in their quickness, the firepower they carry coupled with their willingness to use it, and the ability to trust one another.


ALL ROADS LEAD TO TERROR

Future Titles in The Dreadland Chronicles
(current works in progress)

This Way To Heaven
Library of the Damned
Armageddon Air Force