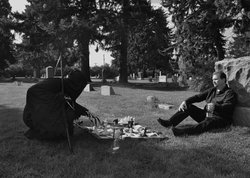 Kenneth retired from a career in law enforcement and now lives in Fort Collins, Colorado with his wife and daughters. His publication history includes a novel, The Amazing Mr. Howard (JournalStone) and the nonfiction book, Ghost Under Foot: the Spirit of Mary Bell (Llewellyn), plus dozens of short stories. He has been a finalist for the Pikes Peak Writers Paul Gillette Memorial Award and a two-time finalist for the Pacific Northwest Writers Association Zola Award. You can learn more about Kenneth at www.kennethwharmonauthor.com

It is 1932. The world has turned to dust. Lucifer stills walks among us, testing the faithful at every turn. Then he discovers the reincarnation of Eve in a Dust Bowl revival tent … and their ancient passion threatens the world again. When Lucifer and Eve were together in Eden, their relationship changed the fate of humanity. What will happen if God brings them together again?


Blood Lily by Jenny Allen
The Misadventures of Bob by Jaime Johnesee
A Jar of Fingers by C.L. Hernendez
A Coin for Charon by Dallas Mullican
The Human Condition by Mark Taylor
Spook Lights by Eden Royce
Mateguas Island by Linda Watkins
In the Hands of the Unknown A.E. Hellstrom
Winchester Over by Dave Lund
The Complex by J Rudolph
The Dead Song Legend by Jay Wilburn
Zombie and Chainsaws by Mike Evans
Flight of Destiny by Francis H Powell
Through a Mirror Darkly by Kevin Lucia
Awfully Apetizing by Leod D Fritz
Darkly Wood by Max Power
Family Reunion by P. Mark DeBryan
Slice Girls by Carmilla Voiez
Cannibal House I by Shaun Adams
Zombies Inside by Rebecca Besser
Dark Crescent by Dev Jarrett
Werewolf Nights by Mari Hamill


Author T.W. Brown has added the first nine books of his Dead Series to the prize pool, bringing the total number of books to 31.