William Allen was born and raised in the Piney Woods of Southeast Texas, a place of great natural beauty and a scarcity of decent paying jobs. Growing up on a farm, he dreamed of one day finding one of those jobs involving working indoors and enjoying air conditioned comfort. Most of the farm work was outdoors, rain or shine, and air conditioning was something he read about in books. They even talked about something he'd only dreamed of before, something to do with health insurance. No, that was probably just science fiction.

Books were a refuge for young William, and as he grew older, he decided to try his hand at creating his own fantasy worlds. To his way of thinking, writing seemed to involve way more "brain sweat" that the other kind. So far, so good. And at least the air conditioning still works.

"Walking in the Rain" started as a short story and over time developed into a series of novels exploring the changed world a young man who finds himself stranded far from home when the lights go out. Everywhere.

Luke is a capable survivor who quickly hardens his heart in order to live a day-to-day existence while making a seemingly hopeless trek home to his family. Along the way, Luke meets someone special who helps him rediscover his lost humanity. Make no mistake, though. Luke learned to be a cold-blooded killer to survive, and having something to lose merely makes him all the more vicious when he is forced to act.

To date, the first three books, "Walking in the Rain: Surviving the Fall", "Home Fires Burning", and "Hard Rain Falling" have been published exclusively here on Amazon. Book Four in the series, "Dark Sky Thunder" will be released in September, 2015. These first three titles are all now available in audiobook form from Audible.com. The incomparable Pat Young provides the dramatic readings for these books and adds an extra dimension to these powerful stories.

Also, the short story "Hunger Driven" will shortly be joined by a full length zombie novel currently in production, entitled "A Feast for Crows". The sixty plus page tale represents the author's own take on the Zombie Apocalypse in Southeast Texas and is a jumping off point for the forthcoming full length novel. The scenery is still pretty except for all those nasty walking corpses littering the landscape.

The author is proud to have contributed a short story, "'Ware, Goblins" for the recently released zombie anthology "Bite Sized Offerings." This collection of stories represents a lineup of the best talent in the horror business, and I can only assume they included me by accident. Oh, well, it was my gain, after all.

Look for these and more books from William Allen coming soon. For any questions or comments, you can reach him on Facebook at William Allen-author. Or, e-mail him at walkingintherain6@gmail.com. He might not be able to give you the winning lottery numbers, but otherwise, feel free to ask questions. 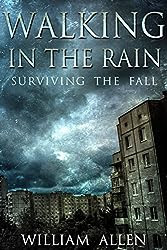 Synopsis:  Sixteen year old Luke was trapped in Chicago when the lights went out and civilization began to unravel. Determined to get home to his family, Luke begins a thousand mile odyssey that will show him the depths of human depravity while also giving him a chance at redemption.

In an abandoned house in Missouri, Luke makes a discovery that changes the way he acts and feels as the suffering of another forces him to fight yet again. Luke is already haunted by what he has seen, and he fears what is yet to come as he takes on a partner in his travels.

This is not a romance tale, or a zombie story, or a book about the end of the world. The world will still be here after civilization falls. This is a story about a boy who becomes a man in the most trying of times, and this story is filled with the violence of those lawless times.


Blood Lily by Jenny Allen
The Misadventures of Bob by Jaime Johnesee
A Jar of Fingers by C.L. Hernendez
A Coin for Charon by Dallas Mullican
The Human Condition by Mark Taylor
Spook Lights by Eden Royce
In the Hands of the Unknown A.E. Hellstrom
Winchester Over by Dave Lund
The Complex by J Rudolph
The Dead Song Legend by Jay Wilburn
Zombie and Chainsaws by Mike Evans
Flight of Destiny by Francis H Powell
Through a Mirror Darkly by Kevin Lucia
Awfully Apetizing by Leod D Fritz
Darkly Wood by Max Power

Have you read Walking in the Rain?
https://www.amazon.com/dp/B00SS3WBDK
#2015HHAC #BookBoost