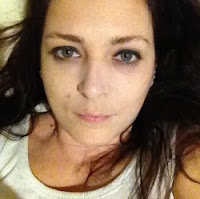 J. Rudolph is the author of the zombie series The Reanimates, and the young adult paranormal mystery, Hadley's Haunting. Born in 1977, she resides in Southern California with her husband, son, two turtles (who she claims own all rights to her house and allow the people to live there, since only they can open the food jars) and her maniacal bird (who seems to have developed a taste for flesh in its lifetime). As a nurse with over fifteen years of experience, she often incorporates an element of medical training in her stories, offering authenticity to her medically minded characters. She also offers authenticity to her zombie series--she calls herself a living dead girl ever since her spinal reconstruction in 2014.

The Complex (The Reanimates Book I)

Synopsis: Cali Anglin, RN, had a great life. It may have been nothing special to the rest of the world, but she loved it.

That was on a Wednesday.

By Friday, it was gone forever.

With the government gone, electricity extinguished, and the food supply dwindling, she has to face questions she’s never asked herself before–just how far would she go to save her family, her friends and her rapidly collapsing community? Would she kill for them? Would she die for them?

She’s about to find out.

The Highway (The Reanimates Book II)

Synopsis: The Complex is in ruins. The zombies are everywhere. Cali Anglin and the other survivors have one slim hope: sanctuary in Idaho, thousands of miles away. They must take to the Highway – Interstate 15, the only path to safety. Their trek across a devastated America is one horror stacked on another, constantly pursued by the hungry dead. They must ask themselves: How much would you pay to begin again?


Win your very own  horror library.

Blood Lily by Jenny Allen
The Misadventures of Bob by Jaime Johnesee
A Jar of Fingers by C.L. Hernendez
A Coin for Charon by Dallas Mullican
The Human Condition by Mark Taylor
Spook Lights by Eden Royce
In the Hands of the Unknown A.E. Hellstrom
Winchester Over by Dave Lund
The Complex by J Rudolph
The Dead Song Legend by Jay Wilburn
Zombie and Chainsaws by Mike Evans
Flight of Destiny by Francis H Powell
Through a Mirror Darkly by Kevin Lucia
Awfully Apetizing by Leod D Fritz
Darkly Wood by Max Power
Family Reunion by P. Mark DeBryan
Walking in the Rain by William Allen