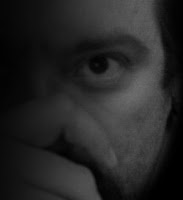 Mark Taylor's debut novel crash landed on planet earth in 2013. Its dark brooding style benchmarked his writing and has led to further releases of novel and short story collection alike. While most of Mark's work is macabre, occasion has it that he will write about kittens and daisies. Just not very often.

Whichever it is he works happily, portraying dark existences on this planet and others. He relays his fears and doubts on his characters, so always has a smile. If Mark is real, as some say he is, you might find him in England.

"Mark Taylor drags you down into the darkest and most twisted pits of human nature." - Darren Gallagher, author of Strings

"[Shutter Speed] worms its way into your psyche and latches on as you watch the events unfold." - The Bibliophilic Book Blog

Synopsis: Burned, scarred, and left for dead, Jimmy Tasker is running from everyone.

The blaze changed him—changed the way his brain fires—and left someone else in his head with him. Someone who wants to kill for fun.

He changes his name, buries his past, starts a new life…and disappears.

Years later, four friends from the city are hard up. Steve needs work, Gil’s jumpy, Peter is struggling, and Cal’s an addict. So they plan a robbery. Steve backs out, but the other three go through with it and botch the job, resulting in the death of Lauren Westerbrook.

Ronan Westerbrook has a hidden past, a love of photography…and a fondness for flame.

Ronan’s revenge for his wife’s death culminates in a bloodbath—and unleashes Jimmy, who was there all along, tormented by nightmares of atrocities he has no idea if he truly committed.

Steve is trying to build a respectable life, but now Jimmy has one last piece of unfinished business…the only witness who can identify him.