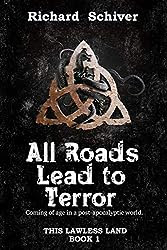 Four boys strengthen the bonds of their friendship, while taking their first hesitant steps into adulthood, as they face the brutality of an old, new world. They will be tested at every step in their journey, as they travel through a blasted land where the only hope is for a swift death followed by an endless sleep. Survival lay in the firepower they carried, coupled with their willingness to use it, and their ability to trust each other with their own lives.

The world has become a wild place filled with wild things, and into this new reality each of them had been born. Coming of age at the end of days, where savagery was the norm, and man's inhumanity to man was on daily display. Where the only law was the firepower one carried and the only hope was for a swift death followed by an endless sleep.

Meat was born at the height of the Zombie apocalypse, upon his birth his mother took one look at him and pronounced him meat. He grew up in a reality where they were all nothing more than walking bags of meat, so in his mind the name fit perfectly.

Window, his best friend, is very quiet, and ever watchful with a quick hand. To him friendship was the most important thing in the world. His family had perished in the ruthless times after the awakening and his temperament had been forged in the fire that took them from him. His friends were all he had left so he watched over them with a jealously protective nature strengthened by that sense of invulnerability all boys his age embraced. Further backed up by a quick hand with the .44 he'd used to kill the men who had raped his mother.

The remaining members of this quartet are Einstein who had been born within the compound at Bremo Bluff after the apocalypse. Having spent his life behind the fence he had no first hand knowledge of how brutal the world has become. As his name implies he's the smartest in the group, as well the most innocent. While that innocence helps to soften the ruthlessness of the other three, it will serve to drive a wedge into their friendship. On this trip he will discover just how terrifying the world beyond the fence has become.

The final member is Billie-Bob, one half of a set of twins who appeared outside the fence several years earlier. Your typical class clown whose mouth runs a mile a minute, if he isn't sharing overused jokes about Zombies, he's whispering the passages from a book his mother used to read to him when he was younger, a chant that provides him with a degree of comfort. Billie-Bob is unique in that at the tender age of eleven he has proven himself to be a natural born sniper with a willingness to use his special talent to protect his friends.

The trail they follow leads them East, into the Dreadlands, from which those who had dared venture in the past never returned. There are places where the fabric of reality is at its thinnest. Where nightmare creatures roam the shadowy corners of a well lit world. Existing at the edge of man consciousness, an indistinct blur briefly glimpsed in our peripheral vision. Their presence felt on a primitive level that reached our consciousness as a faint whisper in the night. Their touch the soft caress of chilled fingers dancing along the spine like the half remembered terrors lurking within the childhood memories of every person who had ever feared the night.

In Richmond they will be confronted by a savage cult of children who worship a creature of the night. A nightmare being that feasted upon the fear of its victims, delving into their innermost secrets, revealing half forgotten terrors that lay like a rotting carcass at the heart of their souls. For these creatures, that were once considered nightmare imaginings, are now awake in a world where the population that once served as their food source has been reduced.

About the Author
Richard was born in Frostburg, Maryland, in the winter of '58' and currently lives eight miles away. A five-year stint with the military allowed him to see what he wanted of the world. Married with four grown children and eight grandchildren, he and his wife provide a home to four pets that are spoiled beyond rotten.

In addition to writing daily he works a full time job in retail, and piddles around in his wood-shop making one mess after another when time permits.

Written in Blood is Richard's personal blog where he shares his thoughts on writing, and whatever else that might strike his fancy. http://www.richardschiver.com

Sign up to be notified of publishing updates and new releases as they become available. He promises to never share your contact info, nor will he swamp your inbox with unnecessary crap. He’ll also toss in a free copy of White Walker when you sign up.