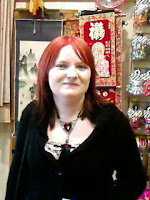 Shari Sakurai was born in Chichester, West Sussex, United Kingdom. After completing secondary school she moved away from further education to work in administration.

Shari is very interested in other countries’ cultures and mythology; in particular Japan. Japanese themes and influences can often be found in her work.

Shari's debut novel Demon's Blood was released in ebook format on 25th January 2014. She has participated and won the National Novel Writing Month challenge for the past eight years.

1.) When did you first get serious about writing?
I’ve always loved to write since I was a child, but I only got really serious about writing for publication about six years ago. I’d wanted to publish a novel since I left school, but there were other things in my life that had to take priority and it’s only been in recent years that I’ve been able to realise my dream.

2.) What is the hardest part for you about writing?
I’m a perfectionist when it comes to my writing and so I find it hard to stop tweaking and re-wording things. 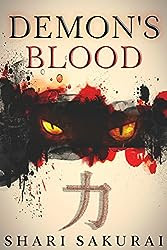 Synopsis:
Immortal blood is precious and Kokawa Taku’s makes him especially unique.
After vampire hunters force them to flee Tokyo, Taku and his lover, Thane, try to make a new life for themselves in England. But three months later Thane is still tormented by nightmares of the fire that almost cost them their lives. This leads to carelessness and the discovery of one of his victims.
When faced with threats from all sides Taku tries his best to protect them although his actions are met with disapproval and anger from Thane. Unknown to his lover, Taku is also struggling to keep hidden the truth of what really happened three months ago.
However, it is only a matter of time before Taku’s past and bloodline catches up with him.

3.) How did you feel upon publication of your first completed project?
Publishing a novel has always been my dream and at first it seemed almost surreal for it to finally become a reality. After it had sunk in that I’d actually done it I felt so pleased and proud of myself. I also felt some apprehension about whether or not people would enjoy what I’d written. For me publishing a novel is like putting a part of myself out there and I was nervous about the feedback I’d receive – thankfully the majority of it so far has been positive and lovely!

4.) What is more important to you, story, or character? Why?
It’s difficult, but I’d say characters. They are the life of the story, the ones driving it forward. Without great characters the reader can’t relate to what they’re going through or form any kind of emotional attachment to the novel.

5.) What is a typical day like in your world?
I get up and check my emails before getting ready and going to work. When I get home I try to write every night after dinner, even if it’s just a paragraph. I then check my various social media accounts, emails and then unwind before bed by playing Sims on the laptop or Pokémon on my 3DS!