For most people February brings to mind the deept chill of winter coupled the warmth of Valentines day. What many people don't know is February is also Women in Horror month (WiHM), an international, grassroots initiative, which encourages supporters to learn about and showcase the underrepresented work of women in the horror industries. Whether they are on the screen, behind the scenes, or contributing in their other various artistic ways, it is clear that women love, appreciate, and contribute to the horror genre. 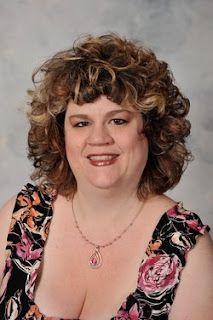 To help celebrate, each day for the remainder of February I will feature a different women working in the horror genre. I hope to make this an annual event so next year the entire month of February will be devoted to those women who work in the horror field, be it behind the scenes, on the screen, or as a creator.

First up allow me to introduce you to Lori Michelle, who is the managing editor for Dark Moon Digest Horror Quarterly and Dark Eclipse: The Dark Moon Digest monthly e-magazine. She also helps edit their special anthologies, including Mistresses of the Macabre, and helps convert most of their publications to e-publications. She is also the co-owner of Perpetual Motion Machine Publishing, where she terrorizes her partner with facts and figures.

A single mother of two children she spends a majority of her time trying to keep her 6 year old from hitting the dog in the face. During what spare time she can scraps together (I really have some?)she dabbles in graphic art, using that knowledge to make business cards. logos and flyers for people who need something more creative than the norm.

A writer herself she has been published in several anthologies, including the Bram Stoker nominated Slices of Flesh. She maintains a website at www.lorimichelleauthor.com, but  can be found more often hanging out on Facebook. In case you can't tell, her favorite color is purple. :)


She edited the charitable anthology, Bleed, with all proceeds going to help child cancer victims and their families.

Synopsis: No one should ever have to deal with cancer, especially a child. BLEED is a charity anthology where the profits will go to help children who have cancer. Forty-seven stories, poems and essays by the best in the horror business, including Bentley Little, Rick Hautala, Joe McKinney, Mort Castle, Benjamin Kane Ethridge, Tim Waggoner, Gene O'Neill, and William Nolan. This is for all the little girls and boys who fight the good fight everyday. Proceeds from the sale of this book will be donated to The National Children's Cancer Society. thenccs.org

Synopsis:Lila's perfect Saturday night means falling asleep on the couch with a glass of wine and a good book. But even the perfect night could go bad when Lila starts longing to know what secrets her brain keeps locked away. Left with only distorted nightmares of her life before the accident, she numbly goes through life, hoping to find out just who she is.

Amber, double-crossed by a lover, would much rather be slipping something in the wine than sipping it. While she gives great pleasure, loving Amber comes with great pain. Her body is a weapon and she knows how to use it.
Detective Balducci, now removed from the Harvester Killer case, begins an off-the-record investigation that will not only test his skill as a seasoned yet loose cannon police officer, but stretch his emotions to the breaking point. As their lives crash together, past scandals and shocking truths surface as they find out just how close to the killer they have been all along.