A trip down memory lane, recalling the ones that got away.

My oldest grandson has recently turned sixteen and just the other day got his learners permit. While it makes me feel old to realize one of my children's children has reached that age where I got my first car, it also sent me down memory lane to revisit some lost loves. What many people don't know about me is I like cars. I may bitch and moan and complain about working on them, but I've got grease under my fingernails, and I like it. 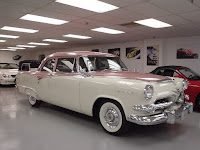 The very first car I ever owned was a 1955 Dodge Coronet. Of course it looked nothing like the one in the picture and truth be told the car was given to me by my dad. I tinkered with it trying unsuccessfully to get it started. I didn't have a clue what I was doing and at the time my Dad was fighting against the diabetes that would kill him a couple of years later, so he was in no position to help. I eventually graduated from high school and joined the military. The last I heard about the Dodge it had been sold to my Uncle who parked it in his back yard where it sat until it turned into a pile of rust.

The next vehicle I owned was a 1965 Ford Fairlane 500 that I purchased from a so-called friend at my first permanent duty station in the military. I paid 500 bucks for it, and when the transmission went out on it (at least they said it was the transmission) I sold it for a loss.

My next vehicle purchase was a 1971 AMC Javelin that I bought from one of the dealers along the main strip in Killeen Texas. It was lime green and looked like someone had painted it with a paint roller. The interior was trashed but it started when I turned the key and sometimes I could bark the tires. Of course duty called and a trip overseas courtesy of Uncle Sam ended that love affair.

Over the intervening years I've owned a number of different vehicles and in that time I've taught myself how to work on them. I rebuilt a transmission once and it worked. I've also rebuilt engines so I know a thing or two about the inner workings of a motor. It's the electrical systems that confuse me.

I've been handing down this knowledge to my oldest grandson. He has helped me a number of times work on the assorted vehicles I've owned One of my fondest memories comes from when he was only six and we were lying together under an old Daytona. I caught hell because he got grease on his clothes, but I know he learned something from the experience, I know I did.

What was your fist vehicle?