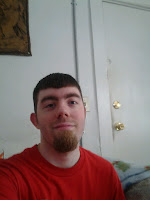 Justin Bienvenue is an author and poet from Massachusetts. He has 3 published works soon to be 4. He enjoys picking his brain and rummaging through the nonsense to find those creative and innovative gems that will become poems and stories. When he’s not writing he enjoys spending time outdoors, sports especially Football and learning about History and the unexplained.

A.) I would say I first got serious about my writing back when I started writing poetry in high school. After I took a liking to it I always found myself writing poems here and there about all sorts of topics and what I was feeling. I became even more serious about it after the release of my first book, The Macabre Masterpiece: Poems of Horror and Gore. After I wrote my first book I still wrote poetry but I expanded into short stories and began thinking about concepts for another story, it was then that I realized that this is something I am very much into.

A.) Getting into a rhythm. It might not seem like much but I find that unless I have an idea of what I want to write or I’m in the mood I can’t just sit down and begin writing a bunch. Some days I can write a lot and other days I can’t seem to get into a good rhythm. So consistency is hard at times, I would also say finding the write words can be difficult. I don’t like being cliche but I also don’t want to turn the reader off with an odd word so I try to find the right words in certain situations.

Synopsis: In 1920's Shanghai the city is slowly being taken by the opium trade. What was once small and hardly seen has now become more evident and direct. For one young man named Ryu Tsang, he wishes to find out more and put a stop to it, for another man named Shin Shaojin it’s embracing the opium and making sure it infiltrates the city to the best of it’s ability. When the city becomes smitten with the drug to what direction will it go?

A.) Just like anyone else I felt excited and beyond ecstatic. I remember thinking that it’s hard to believe I would be becoming a published author. While I wasn’t so happy after a while because I had serious issues with the company I went with it’s still a nice memory with that opening thought and feeling that I had a published work, nothing will ever replace that.

5.) What is a typical day like in your world?
I’d love to say it’s exciting and that I do so many eventful things like go mountain climbing or skydiving daily but I’d be lying lol. A typical say for me consists of waking up around 11, watching television, taking a shower and getting ready for the day, eat lunch, watching more television, sitting down and begin writing or something involving the writing and book world and then whatever else happens. I also try to go for walks when I can as it helps me clear my mind and even think of ideas.