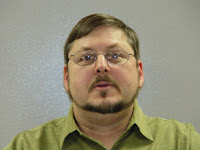 I have always loved to read. I am an avid reader and Amazon reviewer, present ranking 107,262. I've been married for 34 years, father of four, from Central Arkansas, USA. I was born in Coldwater, MI. My father moved us back to Central Louisiana when I was a boy, and I finished High School at Boyce High School in Boyce, LA. I have worked as a welder and later as a telecommunications worker. My faith is important to me and I attend Trinity Church of Hot Springs, AR. I am nearing retirement age for my day job, and when that day comes, I hope to spend my days writing, reviewing, and editing. I plan to return to writing in 2016 and finish book two of my Warzone series, entitled "Warzone: Operation Wolf Hunt."

2.) What is the hardest part for you about writing?
A.)  Since I work full time for a major telecom, and in transit to work two hours a day, I would say making time to write. I started my writing career by writing before work started and during lunches and breaks, and occasionally in the evenings and weekends, but not typically.

Synopsis: The space race was a lie, and the cold war wasn’t as cold as you thought. While we were playing spy versus spy, conducting an arms race and a space race on Earth, things were heating up in the solar system.

In 1959, an alien vessel crashed on the Navajo reservation, ushering forth a colonial space race in the solar system between the two superpowers. The prize is the mysterious metal known only as alloy-x and the alien technology that promises to make one nation or the other the dominant superpower in the arms race. The American commander finds himself fighting with the toughest antagonist of his career. He had finally met his nemesis. The stakes are high. Losing the struggle could tip the balance of power on the Earth, giving the Soviets the advantage in Earth’s cold war.

3.) How did you feel upon publication of your first completed project?
A.)  Ecstatic! I started the project in 2004, and published in 2013. It was a very long road.

4.) What is more important to you, story, or character? Why?
A.)  That’s a tough one. I would have to say the story, because a good story sets the framework for the character development. It draws out the good and bad in the characters, and their humanness.

5.) What is a typical day like in your world?
A.)  Get up at 5:15 am, get ready for my day job. I usually pop an audiobook in the CD player for my long commute. (I currently have an Amazon reviewers ranking of 107,262) Then I get to work, check my email and respond to anything pertinent to do with my writing career, and then I either edit another author’s book or write on my own projects until work start. Then I do it all again at lunch. I am going to turn 60 this Friday, and getting closer to my retirement and my dream job—full time editor and author.
Posted by Richard Schiver